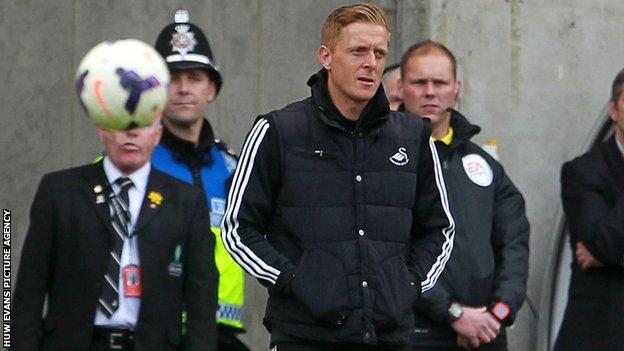 Garry Monk says he feels "honoured" to be Swansea City's permanent boss but is not daunted by the task ahead of him.

The 35-year-old was confirmed manager on a three-year deal following a spell in interim charge.

His first game in full-time charge will be Sunday's final game of the Premier League season at Sunderland.

"It is something I have always dreamed about doing. I didn't expect it to come this soon, and it is an opportunity I intend to take," he said.

"I've lived in this city for 10 years. I have always tried my hardest for the club, so it never felt like a trial.

"You are there to be judged, I expect that. It doesn't faze me at all. I have a plan in my own head of what I want to do and how to go about it.

"I want to take the club forward. I have been part of the 10-year journey with this club, and now it is about improving on that, which is what I will be looking to do."

The Swans go into the final game of the season at the Stadium of Light in 13th place in the table after a 1-0 home defeat to Southampton last Saturday.

"We really want to finish off with a positive result for our fans and ourselves on Sunday," Monk added.

"We were disappointed last week (against Southampton). We deserved at least a point, and to come away with nothing was hard to take. We need a reaction."

"You will be constantly linked with players when you are in the Premier League. I think it's just a case of us working closely together and making sure we get the targets we want to get.

"As a club, you have to be looking at all sorts of players, and that is what we have been doing. In the coming weeks, I guess we will narrow it down."