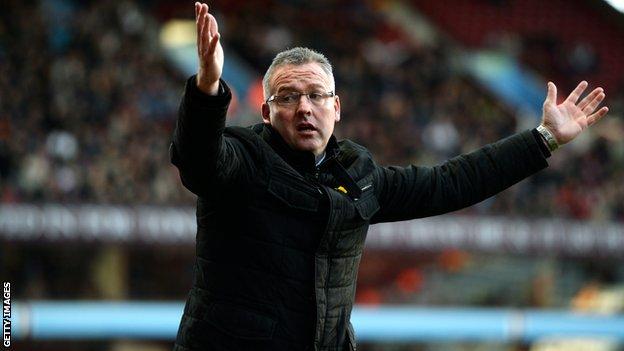 Both struggled to avoid relegation and now face talks with their respective boards once the season is completed.

Villa owner Randy Lerner is rumoured to be considering selling the club, while Mel has been linked with a return to Spanish club Malaga.

"In four or five days we'll know where we are going to end up," said Mel.

Lambert, 44, only secured Villa's Premier League status with last weekend's victory over Hull and awaits a promised statement from Lerner about the American's future as soon as the season finishes.

"I'll say it once and once only - I don't know what the statement from the chairman is going to say," said Lambert.

"I don't know when it's coming out. I know as much as you (the media) do at the minute, but I'll respect whatever Randy's got to say. I don't have one problem.

I've really had to do more than being a head coach - there were too many issues that aren't related to football.

"My job is to keep this club up and protect everybody else and that's what I've done. I'll just see what happens."

Mel, who was only appointed West Brom head coach in January, may need assurances from chairman Jeremy Peace if he is to be persuaded to stay on at the Hawthorns.

"I'll meet with the chairman and we will see if the vision he has for the club is the same as mine," explained Mel, 51.

"If it is we will continue on to next season, and if it is not, we will not."

Mel claimed the uncertainty about his future and numerous off-field incidents this season - including a dressing room clash between Saido Berahino and James Morrison and the controversial departure of Nicolas Anelka following his 'quenelle' gesture - had affected the club.

"I think this has been really damaging for everyone," he added. "I've really had to do more than being a head coach - there were too many issues that aren't related to football."

Lambert, appointed Villa manager two years ago, has been involved in a relegation battle in both of his seasons at the club, but he regards his success in keeping Villa in the Premier League this term as the "greatest thing" he has achieved in his managerial career.

"It's been the hardest season ever, but it's never plain sailing in football management and that's why I say it's the greatest thing I've achieved," said Lambert.

"I won promotions at Norwich from League One to the Premier League, but I still class this as the best thing I've done."