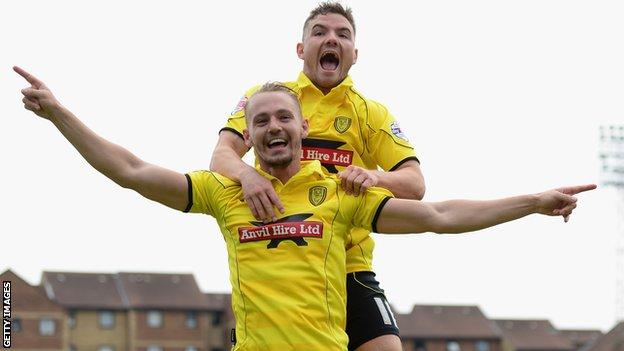 Burton booked a place in the League Two play-off final against Fleetwood after earning a 2-2 draw against Southend.

The Brewers, last year's losing semi-finalists, held a 1-0 lead going into the second leg and Marcus Holness gave them a two-goal cushion on 21 minutes.

But the hosts went in ahead at half-time, and level on aggregate, thanks to Ryan Leonard's audacious overhead kick and a header from Anthony Straker.

But Adam McGurk struck in the second half to send Burton to Wembley.

It was McGurk who was the hero in the first leg at the Pirelli Stadium and he popped up with his 12th of the season to rescue Burton.

The Brewers' progression to Wembley, under manager Gary Rowett, will help erase the memories of last year's defeat by Bradford at the same stage and it comes five years after their promotion from non-league.

In a lively first half at Roots Hall, Burton saw two free-kicks saved well by Daniel Bentley early on.

But the Shrimpers keeper was unable to keep out Holness's bullet header, which came from Chris Hussey's set-piece.

Going two behind on aggregate seemed to spark Phil Brown's Southend into action, and they fought back in style.

Influential midfielder Ben Coker headed the ball down to Leonard's feet and he flicked home an acrobatic kick to make it 1-1 on the day.

And seven minutes later Southend grabbed their second, when Michael Timlin floated a cross into the box and it was nodded in by Straker for his sixth of the season.

With the aggregate score level at 2-2, the second half was a more tense affair but it was Burton who took the advantage, as Hussey's free-kick ricocheted around the box and McGurk turned it past Bentley.

Southend pushed to find an equaliser and they thought they had found it when, at the start of the six minutes of injury time, the ball fell to Leonard but he placed his volley agonisingly wide.

Jack Payne then hit straight at Brewers keeper Dean Lyness and time ran out for the Shrimpers, who will now tackle a fifth consecutive year in League Two.

"I'm sad for the players in there, to tell you the truth. I've been saying it all season and it's true that we've got a young group.

"The learning curve is to take this feeling which we're all feeling at the moment, which is sadness, and you can use these bad moments and use it to your advantage.

"We have a pre-season to prepare now and we've said to the players to make sure they stay healthy during the summer and then we'll come back and hit the ground running.

"We had done the job at half-time, but we just needed to stay calm and get over the winning line."

"It was an amazing game. They deserve a place at Wembley.

"I'm proud because it's a culmination of lots of games. It's not about feeling proud of anything I want to achieve. I'm proud for the group.

"The rest of the lads are bouncing around with the champagne. Me and my assistant Kev are absolutely drained. We're exhausted.

"Give me a glass of red wine, let me sit down for a little bit and I'll be OK in two hours."