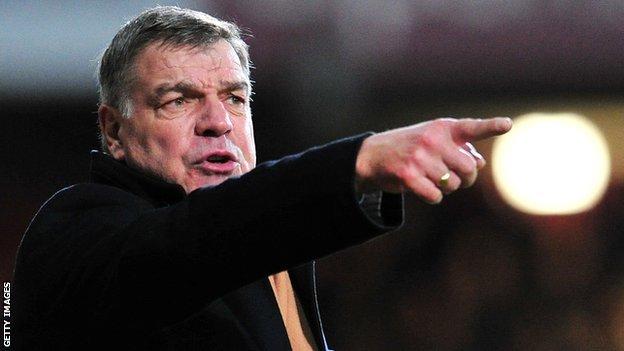 Sam Allardyce is to carry on as manager at West Ham United, the Premier League club has announced.

The statement on the future of the 59-year-old, in charge since June 2011, ends speculation about Allardyce's role at Upton Park.

Allardyce led the Hammers to 13th in the Premier League table, but has faced criticism from some supporters.

"The club have made clear that they want to see progression on the pitch," says a club statement.

West Ham's announcement follows an end-of-season meeting between Allardyce and the club's board.

They considered the former Bolton, Newcastle and Blackburn manager's plans for next season before making the announcement.

The statement said that Allardyce has agreed to recruit a new attacking coach "to ensure the team provides more entertainment next season".

It added that the club expects a top 10 finish in the table.

The statement continued: "After listening to feedback from supporters, the board have insisted on improvements to the set-up of the playing and backroom staff to ensure the team provides more entertainment next season.

"The manager has agreed to recruit a new attacking coach to complement the existing coaching set-up as well as an overhaul of the club's scouting and recruitment operation.

"That will see the board have a greater involvement in the players who are signed, as the board will once again be investing considerable funds into the club this summer.

"The club have made clear that they want to see progression on the pitch and at least a top 10 finish as a result."

Allardyce took charge at Upton Park three years ago after the Hammers had been relegated from the Premier League under Avram Grant.

He led West Ham to promotion via the Championship play-offs in his first season before securing 10th place in 2012-13.

But after a four-match winning run in February, the Hammers finished the 2013-14 campaign with eight defeats in 11 games.

Some fans vented their displeasure at Allardyce during the 1-0 defeat by West Brom on 26 April.

"We are absolutely committed to taking West Ham United to new heights and we want to see the club continue on an upward trajectory next season," said West Ham joint-chairmen David Sullivan and David Gold.

"The 2014-15 campaign is crucial to our future and we are confident that Sam has the passion, experience and determination to make sure it is a success."