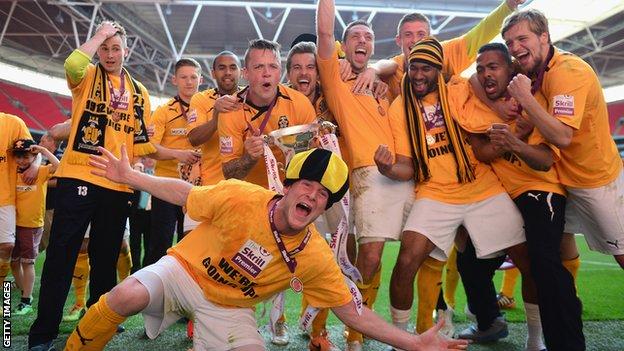 Cambridge United returned to the Football League for the first time in nine years by beating Gateshead in the Conference Premier final at Wembley.

Ryan Donaldson, who left the Heed for the U's last summer, provided the cross for Liam Hughes to head in after the break and then curled home a free-kick.

Gateshead struggled to turn possession into chances, until Jack Lester headed into an empty net to get one back.

Liam Hatch and James Curtis nodded wide in injury time but the U's held on.

The U's nine years in non-league

It was only last season that Newcastle-born Donaldson scored eight times for Gateshead, but he consigned his former club to a 55th year outside of the Football League.

Cambridge, meanwhile, can sympathise with their opponents, having lost at this stage in 2008 and 2009 in their attempts to end their exile in non-league.

The experience of winning the FA Trophy at Wembley back in March would have no doubt helped the U's on the big occasion, but they had to end a 14-game unbeaten run by the Tynesiders.

Both sides were limited to long-range efforts in the early stages, with Donaldson hitting a half-volley that was saved by Adam Bartlett, a former Cambridge player whose only appearance came in the 2009 play-off final defeat.

The Heed were fortunate to not be two men down when Marcus Maddison, already booked for diving, broke up a U's counter-attack on the halfway line, before John Oster looked to have swung a boot at Kevin Roberts.

Gateshead went on to dominate first-half possession, but the closest they came was when Maddison's looping cross dropped wide of the back post.

The introduction of substitute Harrison Dunk at half-time injected pace into the U's attack and the winger's 35-yard drive had to be tipped round the post by Bartlett.

That produced a pair of corners, with the second taken short and then whipped in by Donaldson and nodded home by academy product Hughes.

Donaldson then swung a perfectly placed 20-yard free-kick around the wall and past Bartlett to seemingly put Cambridge into League Two.

But the introduction of towering frontman Hatch gave the Heed a target man, and although he saw a header saved, former Chesterfield striker Lester, who came out of retirement three months ago, put in the rebound.

Gateshead threw everything forward, with James Marwood forcing a finger-tip save from Adam Smith and, with seven minutes of added time played following an injury to U's captain Ian Miller, Hatch and Curtis both had chances, but Richard Money's Cambridge side held out to secure promotion.

"It is the best way to go up. Having won the FA Trophy as well, what was half-a-good season has suddenly been an incredible season.

"I think you can see how important it is from the supporters' reaction today. We brought terrific numbers. Nine years out of the League is a long time.

"There is a stigma about being a non-league club, from people who don't really understand the level. But the fact you can now call yourself a Football League club and the players can call themselves Football League players means an incredible amount."

Gateshead manager Gary Mills: "We've done superbly well. We worked hard and the mental side can drain you.

"But we kept going and we didn't quite finish it off.

"We're gutted of course. You get an opportunity of 90 minutes of football to get Gateshead back into the Football League and we didn't quite do it.

"So it's difficult to take at the moment but you have to bounce back. It's not all happy days. You have to be stronger for it."