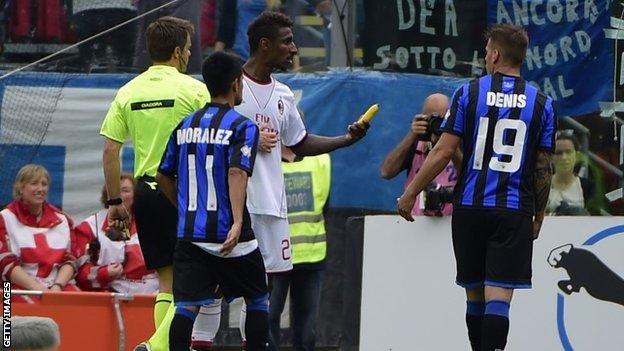 AC Milan players had bananas thrown at them during a 2-1 defeat at Atalanta.

Fans were warned the game would be suspended if there was a repeat.

"Whoever threw the banana on the pitch deserves to have a coconut thrown back at them," Atalanta boss Stefano Colantuono told Gazzetta dello Sport.

"They've ruined what was a great afternoon."

Milan boss Clarence Seedorf said: "I hope they find the culprit and do what they have to do."

Constant was on the receiving end of racist abuse during a pre-season tournament match against fellow Serie A side Sassuolo in July.

Two weeks ago, Barcelona defender Dani Alves picked up and ate a banana thrown at him by a Villarreal fan.

Footballers worldwide showed their support for the Brazilian by posting pictures online of themselves eating bananas, while Villarreal were fined 12,000 euros (£9,850) by the Spanish Football Federation.

Milan's defeat in Bergamo hit their hopes of qualifying for next season's Europa League.

A Gianpaolo Bellini own goal after 51 minutes put the visitors ahead.

German Denis equalised with a 68th-minute penalty after Constant fouled Carlos Carmona, shortly before the bananas were thrown onto the pitch.

Milan's Mario Balotelli hit the post late on before Franco Brienza's 25-yard strike flew into the top corner to clinch victory for Atalanta in the sixth minute of stoppage time.