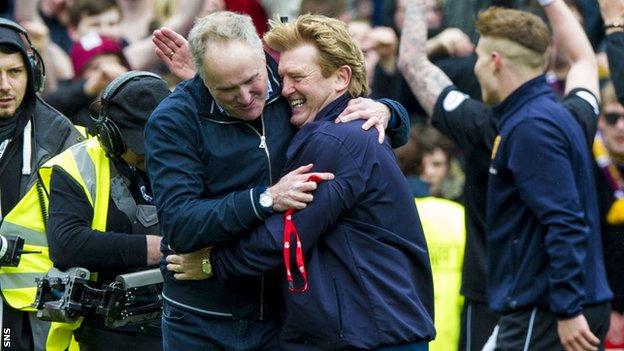 Stuart McCall suggested Aberdeen can have no complaints about the winning goal in the 1-0 win at Pittodrie that clinched Motherwell second place.

The Dons were aggrieved at Craig Reid's late winner with suggestions of a foul on Jamie Langfield by John Sutton.

However, McCall pointed to decisions against his side earlier in the season that went for Derek McInnes' men.

He told BBC Radio Scotland: "If we've got anything today it's evened it up, there's no doubt about that."

The end of the season has been outstanding, it's eclipsed anything I've ever done as a manager

Aberdeen had the better of the 90 minutes, but two last-gasp challenges by Shaun Hutchinson denied Niall McGinn when the striker was one-on-one with goalkeeper Lee Hollis, and Jonny Hayes hit the bar for the Dons.

As the home side struggled for a breakthrough, Reid won it at the death for the Steelmen when he bundled in the winner a minute into time added on.

"There were a lot of bodies in there, and there's a possibility it could have been a free-kick.

"You have to go back to Russell Anderson's goal in the last kick of the game for them at Fir Park where he forearm smashes it in, and takes out [Jack] Leitch on the line which is a clear, clear foul.

"John Sutton scores in the League Cup quarter final - it's a yard onside, we don't get it.

"I thought today we didn't play fantastic but the boys stuck to the game plan. We needed to be in the game.

"The result today is for the effort the lads have put in all season because we've had some big downs. One of the worst results in the club's history getting knocked out of the Scottish Cup [by Albion Rovers].

"We've gone to Dundee United and lost five, been beaten at home to Celtic by five, and we've always bounced back.

"The end of the season has been outstanding, it's eclipsed anything I've ever done as a manager."