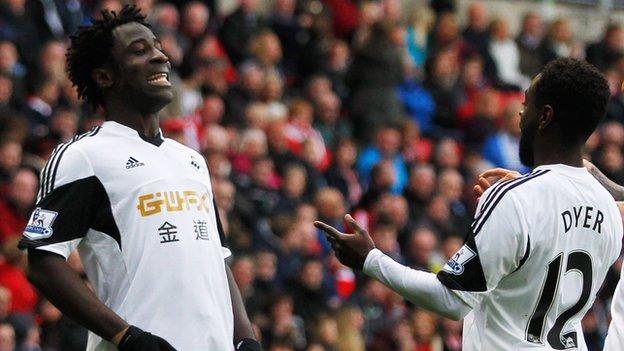 Swansea manager Garry Monk insists star striker Wilfried Bony will be staying at Liberty Stadium amid speculation he is a target for bigger clubs.

The 25-year-old Ivory Coast international, Swans' record £12m signing, scored his 25th goal of the season in their 3-1 win at Sunderland.

Monk said: "He'll be staying, simple as that. We want Bony here."

The new Swans boss added he will also recruit if new signings are better than his current players.

"The most important part for me is that whoever we bring in, they have to be as good or better than we've got," said Monk.

I think some of our passing could have been better... I always want more from the team

"So that's the key for me and key for the club going forward."

But he insists Bony, who joined from Arnhem Vitesse ahead of the 2013-14 season on a four-year deal, will not be leaving Liberty Stadium,

"He's part of our future and someone that we want to progress with and help build the team with," said Monk after his side finished 12th in the Premier League.

"He's been great for us this season and for me, I think, he can only get better.

"He's at a good club, a good place. We're allowing him to perform like that and he will only get better as the team gets better so it looks good for that."

Monk said: "It couldn't have finished much better - three points.

"It's what we came for. I thought we controlled it apart from the period where they got back into the game shortly after half time.

"It's always a dodgy scoreline, 2-0. Ideally you'd want to get the next goal, but we reacted really well.

"We got the third and from that point on we really controlled it and it was nice to see.

"I think some of our passing could have been better as well. I always want more from the team."