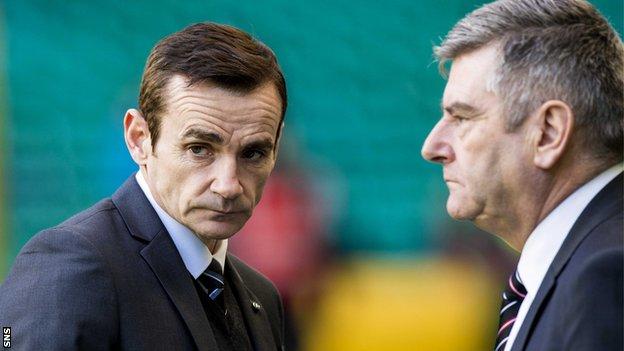 Manager Danny Lennon is leaving St Mirren after the club decided not to offer him a new contract.

The Paisley outfit's board confirmed the 45-year-old, who became boss in June 2010, would go after meeting to discuss his future on Monday.

"Decisions like this are never easy," the club said in a statement.

"However, we would commend Danny for his professionalism and the dignified way he carried out his duties during a very challenging season."

Lennon was named manager of the Buddies following a two-year spell in charge of Cowdenbeath.

He led the Paisley side to League Cup final success in March last year with a 3-2 win over Hearts at Hampden.

St Mirren struggled for spells of this term, but Lennon defended his record at the club after securing Premiership safety.

A club statement read: "The board of directors have decided not to offer Danny Lennon an extension to his contract that expires in June 2014.

"Danny and his players gave our club one of its finest days on 17 March 2013 and will always be remembered by the club for that wonderful day.

"The board would like to thank Danny for his service to the club over the last four years and wish him every success in the future."