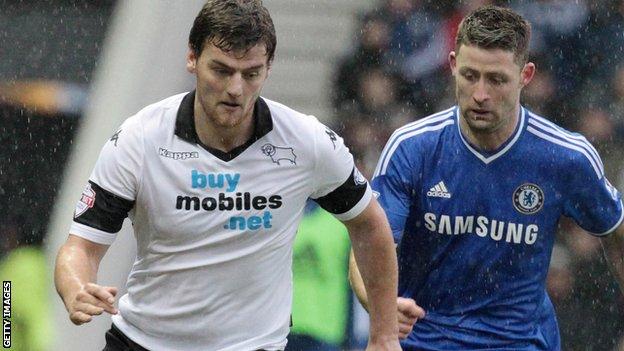 Derby County duo Chris Martin and Craig Forsyth have received their first Scotland call-ups for the friendly against Nigeria.

Manager Gordon Strachan announced his squad on Monday for the match at Craven Cottage on 28 May.

Martin has scored 25 goals this season, including two as the Rams beat Brighton 6-2 on aggregate to secure a spot in the Championship play-off final.

When you look at the link-up between Chris Martin and Craig Bryson, I think it's 40-odd goals they've scored between them. It's a smashing partnership

Martin played four times for England Under-19s, scoring two goals, and Strachan has been impressed with his link-up play with Derby midfielder Craig Bryson, who has also been called up.

"Chris Martin would have been in the squad the last time, but unfortunately we couldn't get the clearance from Fifa in time," Strachan explained.

"He's got a physical presence, but he's a footballer. He's not the quickest, but he's got a quick mind, he sees people in, he scores goals and, when the ball comes up to him, it very rarely goes back the other way.

"When you look at the link-up between him and Bryson, I think it's 40-odd goals they've scored between them. It's a smashing partnership."

Bryson, who has won two Scotland caps, has scored 16 goals this term and Forsyth has also enjoyed an excellent season for Steve McClaren's Rams.

"Young Craig at left back, I think he's played every game this year and, if you get picked by Steve McClaren every game, there should be a good chance of getting picked by me," Strachan added.

Forsyth started his career at Dundee and clinched a move to Watford in 2011. The 25-year-old had loan spells at Bradford City and Derby before moving to Pride Park on a permanent deal last summer.

PFA Scotland young player of the year Andrew Robertson, of Dundee United, has received his second call-up and will vie with Forsyth for the left-back berth.

Norwich City duo Robert Snodgrass and Russell Martin have been excused international duty for fitness reasons after playing through the pain barrier in their unsuccessful bid to keep the Canaries in the Premier League in England.

Celtic winger James Forrest and Sunderland striker Steven Fletcher are among those who are unavailable through injury.

Stoke City midfielder Charlie Adam has been left out to allow Strachan to look at the likes of the recalled Graham Dorrans, James McArthur and George Boyd.

Rangers' Cammy Bell is among four goalkeepers in the squad, along with Hull City's Allan McGregor, who has just recovered from a serious blow to the kidney.

Meanwhile, Strachan resisted the temptation to promote the likes of Stevie May and Stuart Armstrong as Scotland Under-21s have a European qualifier against the Netherlands on the same night as the full team's Craven Cottage encounter against Nigeria.