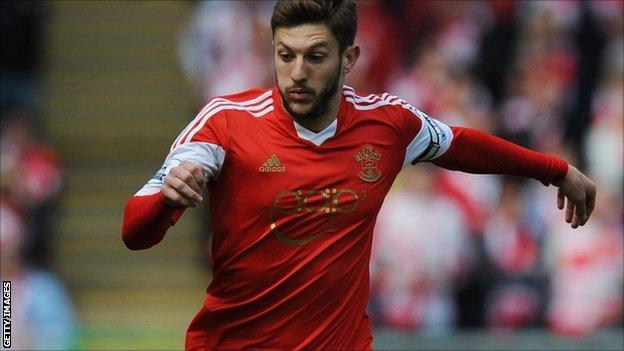 Liverpool have made a final offer of £25m for Southampton midfielder Adam Lallana.

The Reds want to complete the deal swiftly or they will consider moving on to alternative transfer targets.

Saints captain Lallana is due to fly to the United States with England on Sunday ahead of next month's World Cup.

The 26-year-old played 73 minutes of England's 3-0 friendly win over Peru at Wembley on Friday, his fourth senior appearance for his country.

Lallana scored nine goals in 38 Premier League appearances in 2013-14 for Southampton, who lost manager Mauricio Pochettino to Tottenham on 28 May.

Saints finished eighth with 56 points and Lallana's form earned him a place in the Professional Footballers' Association Premier League team of the year, along with Luke Shaw.

Lallana, who was spotted by Southampton playing for Bournemouth's centre of excellence, is wanted by a Liverpool side who narrowly missed out on their first Premier League title in 24 years.

Lallana came through the Southampton academy, which also produced Gareth Bale, Theo Walcott and Alex Oxlade-Chamberlain, and has become an integral member of a side that achieved its highest Premier League points total this season.

Southampton must pay 25% of any transfer fee for Lallana to Bournemouth, who sold the midfielder to his current club.

The Saints turned down Liverpool's opening offer of £20m after indicating that they wanted to end up with that amount from any deal themselves.

Liverpool's latest bid would leave Southampton with £18.75m with the remaining £6.25m going to Bournemouth.

Southampton and England striker Rickie Lambert will have a medical at Liverpool on Saturday after the clubs agreed a fee of about £4m plus add-ons.

Lambert will also be part of the England World Cup squad that leaves on Sunday for friendlies against Ecuador and Honduras.