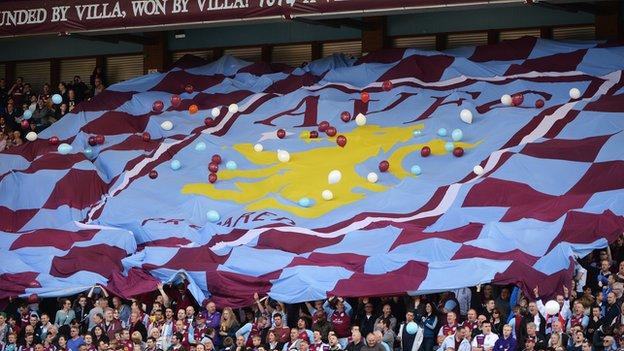 Aston Villa owner Randy Lerner has announced that the Premier League club is being put up for sale.

The American assumed control of Villa in 2006 after a £62.6m takeover was agreed with the club's board.

"I owe it to Villa to move on, and look for fresh, invigorated leadership, if in my heart I feel I can no longer do the job," he said in a statement.

Villa finished the season in 15th position, five points above the relegation zone.

Their Premier League status was only secured with victory over Hull City on 3 May and the future of manager Paul Lambert remains uncertain.

Lerner, who bought the club in August 2006 from Doug Ellis, had said last month that he would address speculation regarding his own future at the club in the summer.

In his statement issued on Monday, the 51-year-old owner said he had engaged Bank of America Merrill Lynch to advise on the club's sale.

"I have come to know well that fates are fickle in the business of English football. And I feel that I have pushed mine well past the limit," he said.

"The last several seasons have been week in, week out battles and having now come through this last season unfortunately limping amidst very meaningful injuries and constant sale rumours, I feel further that now is the time for me to look for new ownership and thus new leadership."

He added: "I am appreciative of the support I have received, even in these last years of comparative struggle when criticism was due, and will look on with others - with fingers crossed - for stronger future performance appropriate to our size and heritage."

News of the sale was revealed by BBC reporter Pat Murphy, who said the likely asking price would be about £200m - which is £100m less than Lerner's estimated total investment in the club.

Murphy also disclosed the involvement of investment banker Keith Harris, who did the deal in 2006 to bring Lerner to Aston Villa.

"My understanding is Randy Lerner won't sell Aston Villa unless Keith Harris gives him the say-so, such is his respect for Keith Harris," Murphy told BBC Radio 5 live.

"I believe this will move fairly quickly. But don't forget, you're looking at £200m, plus in my opinion £100m for players to save Villa from their annual flirtation against relegation and one of these days they will drop off the edge unless this is sorted out. And where are the multi-billionaires around who would go for what is now, a middle-ranking club in the Premier League?

"I'm not sure it's that attractive a prospect now. I don't believe it's going to be that easy to sell Aston Villa to Randy Lerner's satisfaction."

Villa were sixth three seasons running under manager Martin O'Neill, but have only finished in the top half of the table once in the four campaigns since his resignation.

Lambert, who replaced fellow Scot Alex McLeish, joined from Norwich City two years ago and described keeping the club up this season as "an incredible achievement".

"It needs investment, it's simple," Lambert said after the 3-0 defeat at Tottenham on Sunday. "It smacks you right in the face what the team needs. That's the bottom line."