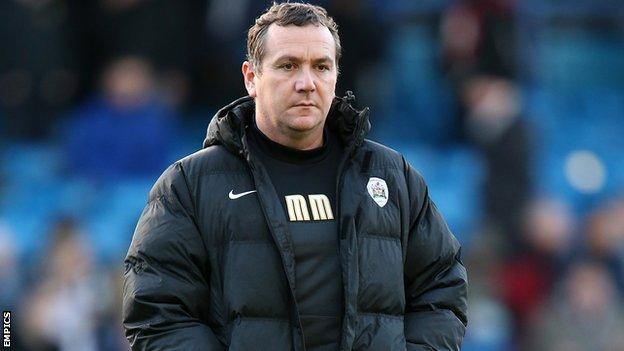 Micky Mellon has been appointed as the new manager of relegated Shrewsbury Town on a one-year rolling contract.

The 42-year-old Scot will be assisted by Mike Jackson, who had been in charge, initially as caretaker, since Graham Turner left in January.

Jackson hoped that he would be allowed to keep the job, despite Shrewsbury dropping back down to League Two.

But Shrewsbury have opted for the more experienced Mellon, who led Fleetwood Town into the Football League in 2012.

"I've nothing but fondness from my time at Fleetwood. From where we started to where we got, we moved an unbelievable distance and I'm very proud of that.

"It was the right time to leave although the circumstances might have been better.

"Then I had a fantastic spell at Barnsley. We were up against some real monsters. We had to be strong and it was a fantastic learning curve."

"Micky represents all the strong values we hold so dearly as a football club," said Town chairman Roland Wycherley. "He is a very passionate person.

"As a club we carefully considered our next step because it was a very important decision for our football club. But having gone through that process, we agreed that Micky fitted our brief perfectly.

"We have all been impressed with his enthusiasm and ideas and we are confident of a successful time together."

Mellon, who was first linked with the Shrewsbury job in January, has been without a club since leaving Barnsley in March, after 15 months at Oakwell as assistant manager, since when he has finished his professional coaching licence.

Both Mellon and Jackson are former Blackpool players - and the Shropshire connection with Bloomfield Road will be further increased when Town's newly-appointed chief executive Matt Williams starts work at the Greenhous Meadow at the end of May.

But Town have parted company with another former Blackpool employee, Andy Morrell, the former Wrexham manager, who arrived to assist Jackson in early March. And chief scout Clive Richards has also left the club.

Mellon and Jackson will also be assisted by Danny Coyne, who remains as goalkeeping coach.