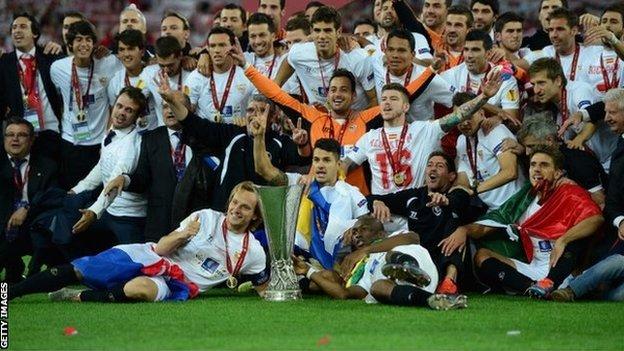 Sevilla beat Benfica on penalties to win the Europa League in Turin, their third triumph in the competition in nine seasons.

Benfica, losers in their seven previous European finals, were seeking a first continental trophy since 1962.

And the Portuguese side might have ended that sequence had Lima's late effort not been hooked off the line.

It fell to Kevin Gameiro to score the winning spot-kick after Sevilla keeper Beto denied Oscar Cardozo and Rodrigo.

Carlos Bacca, Stephane Mbia, who is on loan from Queens Park Rangers, and Jorge Moreno were also on target for the Spanish club.

Brazilian Lima and Luisao did find the net for Benfica but Lisbon-born Beto denied the side from his home city with crucial saves to keep out Cardozo and Rodrigo.

Sevilla overcame fellow Spanish side Espanyol on penalties to win the 2007 final, 12 months after beating Middlesbrough for their first success in the competition, known then as the Uefa Cup.

But while Los Rojiblancos's 9,000 travelling fans celebrated another triumph in Europe's second-tier club competition, Benfica's long wait for success on the continent continues.

Despite recently sealing a 33rd domestic title, their attempt to rid themselves of the increasingly troublesome "Guttmann curse" goes on.

Benfica's Hungarian coach of the early 1960s Bela Guttmann led the club to back-to-back European Cups but left shortly after the second of those triumphs when he was refused a pay rise.

Before going he declared that Benfica would never win another European competition without him at the helm. Fifty-two years on, they have still to prove him wrong.

Jorge Jesus's side had beaten Tottenham and Juventus on their way to the final, and were chasing a unique domestic and European quadruple.

A largely uneventful opening half came to life shortly before the interval, Beto saving from Benfica's Spanish forward Rodrigo at his near post moments after denying Maxi Pereira.

Then the Lisbon club were denied a stoppage-time penalty, German referee Felix Brych waving away strong Portuguese appeals after a foul on Nicolas Gaitan.

There was more action in the first five minutes of the second half than the previous 45 as Benfica carried on from where they left off.

Nicolas Pareja hooked Lima's shot off the line before Rodrigo's goal-bound attempt was charged down.

Sevilla responded with a sweeping move of their own, Moreno picking out Jose Antonio Reyes, but the former Arsenal striker's first-time shot produced a fine save from Jan Oblak.

Six minutes from the end of normal time, Benfica's Lima thought he had won it with a curling shot which Beto somehow managed to claw away.

Chances were few and far between in extra time as the players tired and nerves increased, though Bacca went close when he raced through on goal, only to fire his effort wide.

But Sevilla's frustration did not last long, as they sent their fans into raptures with four well-taken penalties to extend Benfica's European misery.

"At times the game was totally even, but by the end they were doing most of the pushing.

"You could tell our players were suffering from fatigue and physical discomfort but this team has learned how to suffer.

"We have learned how to stay strong and so we were ready for that."

"We were better but in football, the best team doesn't always win. We had the more chances over 120 minutes but we didn't take them."