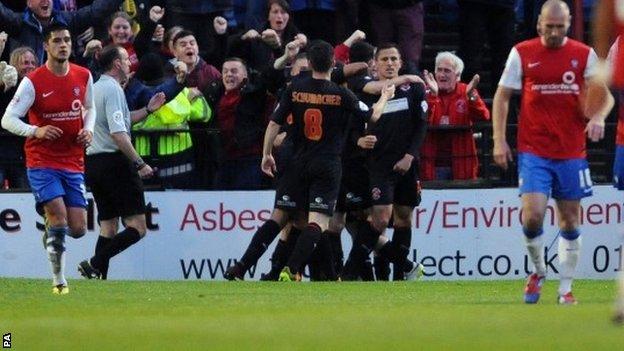 Matty Blair's goal against former side York City means Fleetwood have a narrow advantage after the first leg of their League Two play-off semi-final.

Graham Alexander's side went in front when Blair poked home from close in after Antoni Sarcevic's shot was blocked on the line.

Michael Coulson and Ryan Bowman went close for the hosts but they could not force a leveller as the Minstermen lost for the first time in 18 games.

Persistent heavy downpours meant Saturday's game was postponed because of a waterlogged pitch.

Fortunately, despite some pre-match showers, there was little chance Monday's game would go the same way.

The two teams had been promoted to the Football League together in 2012, with the Cod Army going up as champions and York joining them via the play-offs.

The home team made the stronger start and Calvin Andrew saw his shot from Ryan Brobbel's cutback blocked.

Alexander's side grew into the contest and Nick Pope was called into making a smart save from Sarcevic's speculative effort before the home defence scrambled the resultant corner away from danger.

That was as close as either side came in a scrappy first half on a heavy pitch.

The Minstermen made a bright start to the second period, Coulson seeing a low drive flash narrowly wide before Fleetwood took the lead.

A neat passage of play between Sarcevic and David Ball allowed the former Crewe man in behind the defence and, after a combination of Pope and Lanre Oyebanjo stopped his shot crossing the line, Blair was on hand to force the ball in.

The hosts tried to find a way back into it and sub Bowman came close to turning Coulson's cross in before the latter went close again.

Iain Hume should have grabbed a second for the visitors but he sent a low effort wide after being played in by Josh Morris.

That miss could yet prove to be costly when the two sides meet in the second leg on Friday.

"We're very much in the tie and that's how we wanted it. Maybe not a goal for them to the good, but it's happened.

"The response was excellent in the second half. I thought we were slow out of the blocks, there was a few nerves about.

"There were a few a little shy on their performances but we got that sorted at half-time.

"We've got to make sure we start on the first whistle on Friday night."

"The performance was very good and very disciplined, and we could have had more than one goal.

"It's only half-time and there's a lot of work to be done.

"Even if we'd have got a couple more, it still wouldn't have been over. The play-offs have a history of throwing things up and we have to guard against that.

"We have to do it all again on Friday. We haven't done anything apart from give ourselves a half-time lead."