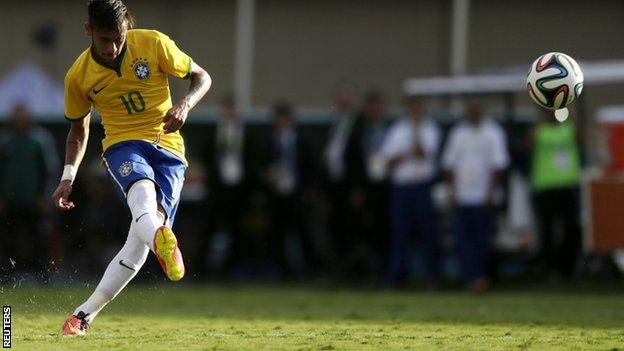 Neymar produced a standout performance as he scored and provided an assist to help World Cup hosts Brazil ease to a comfortable victory in a friendly against Panama.

The Barcelona forward curled home a free-kick before Dani Alves poked in a second during the first half.

Brazil scored again soon after the restart when Hulk fired in from Neymar's backheel.

Panama's Gabriel Gomez appeared to have been sent off soon after for handball inside the area, but the referee quickly reversed his red card and gave a free kick the other way.

There was still time for Neymar to go close to scoring his second of the game when he raced goalwards before despatching a shot from the edge of the area, but his effort flew just wide.

Brazil coach Luiz Felipe Scolari fielded a strong side in what was their first of two friendlies ahead of the World Cup. As well as the likes of goalscorers Neymar and Alves, Chelsea's Oscar and Fluminense striker Fred also featured.

They play Serbia in their final warm-up game on Friday, before facing Croatia in the World Cup opener on 12 June.

Brazil then have further Group A games against Mexico and Cameroon.