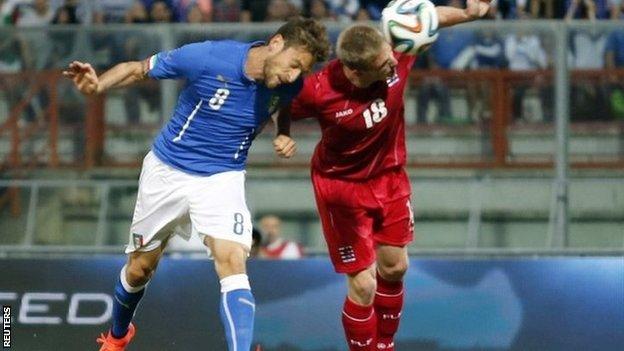 They looked set for victory until the 85th minute when ex-Sheffield United defender Maxime Chanot nodded in.

The Azzurri, who open their Group D campaign against England on 14 June, leave for Brazil on the back of two poor displays, having drawn 0-0 against the Republic of Ireland on Saturday.

Coach Cesare Prandelli, hit by the recent loss of key midfielder Riccardo Montolivo with a broken leg, experimented with a new formation.

It only took nine minutes for the new attacking formation to produce a goal, when AC Milan forward Balotelli delivered a cross with the outside of his boot and found Juve midfielder Marchisio, who scored from eight yards.

Balotelli also had an effort blocked and saw his strike come off the bar, while a Pirlo shot was saved by keeper Anthony Moris.

Luxembourg created few opportunities, but made the most of the chance that came their way when Chanot escaped his marker Alberto Aquilani to head home Mario Mutsch's corner.

"We'll keep working and we know that we can have a great World Cup," said Prandelli.

"I have no doubt after this game about how we will play. We tried a system that worked for an hour. Verratti is ready, both mentally and physically, and can play together with Pirlo.

"Players who are going to the World Cup tend to manage their performance. We weren't aggressive enough and didn't take any risks at 1-0. We thought we could manage the game."