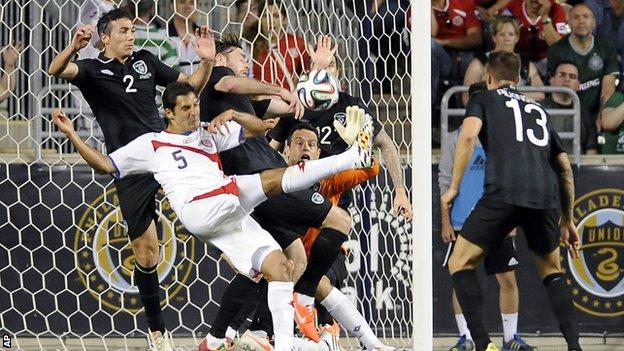 Republic of Ireland striker Robbie Keane had a penalty saved as 10-man Costa Rica fought back to earn a 1-1 draw in a friendly in Philadelphia.

Kevin Doyle headed Ireland in front after 18 minutes before Celso Borges equalised from the spot for World Cup-bound Costa Rica in the 64th minute.

Giancarlo Gonzalez was sent off just before half-time for elbowing Doyle.

Keane had the chance to restore the lead but substitute goalkeeper Patrick Pemberton denied the LA Galaxy forward.

Irish keeper David Forde, who had brought down Los Tico's striker Marco Urena to concede the earlier penalty, then made a good save from Arsenal's Joel Campbell to help secure the draw.

Doyle required five stitches following his altercation with defender Gonzalez, who had endured a running battle with the Wolves forward during the first-half at PPL Park.

"It was stupid, he deserved to be sent off," said Keogh. "I hope he learns from it because he has let his team-mates down and let his country down.

"It was stupid, very stupid. I don't know what went through his head."

Pinto told Gonzalez that his actions were unacceptable and warned the 26-year-old about his future conduct.

The Colombian said: "I spoke to him and I said that this is something that cannot happen now that we are going to a World Cup."

Costa Rica, who lost their previous World Cup warm-up match 3-1 to fellow finalists Japan, now head to Brazil to open their campaign against Uruguay before facing Italy and England in Group D.

Ireland, who will play World Cup finalists Portugal at New Jersey's MetLife stadium on Tuesday, did not reach the finals.