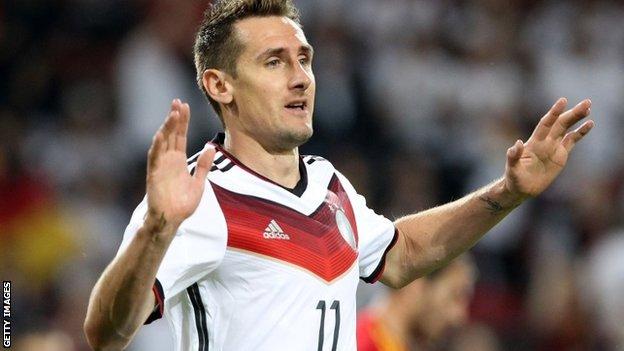 Miroslav Klose became Germany's record goalscorer in a comfortable win against Armenia, but forward Marco Reus was ruled out of the World Cup.

Klose, 35, came off the bench to head in his 69th international goal as Joachim Low's side found some rampant form in the final 20 minutes.

But Reus, who was in tears as he left the pitch, picked up an ankle injury and will now not fly to Brazil.

Armenia were level with 20 minutes to go before Germany hit lethal form.

A goalless first-half ended with Borussia Dortmund forward Reus going over an ankle and being replaced by Arsenal's Lukas Podolski.

Podolski made the opener for Chelsea's Andre Schurrle early in the second half, Schurrle flicking in with a delightful backheel at the near post.

Arsenal's record signing Mesut Ozil hit a post after a lovely move but Germany were then embarrassed when substitute Kevin Grosskreutz gave away a penalty immediately after coming on, bringing down Dortmund team-mate Henrikh Mkhitaryan, who scored from the spot.

The upset was on but a flurry of four goals in 10 minutes killed Armenia off. First Podolski ran on to Ozil's lovely pass and swept home left-footed, defender Benedikt Howedes scored at the second attempt and then crossed for Klose to head in and eclipse Gerd Muller's long-standing national team record.

Klose is the only out-and-out striker in the German squad and can become the leading scorer in World Cup history with two goals in Brazil.

Another substitute, Mario Gotze, then helped himself to a late brace, firing in from another Podolski pass before burying the loose ball after good work from Grosskreutz.

Germany start their World Cup campaign against Portugal on 16 June.