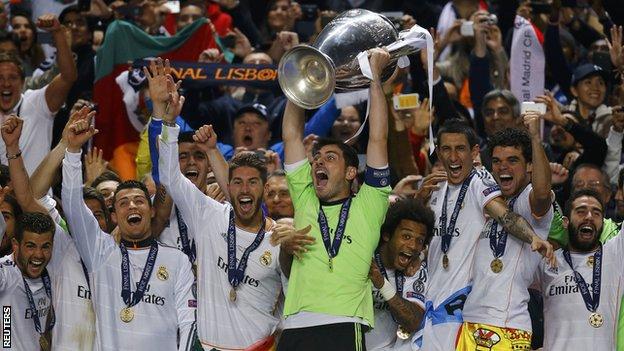 The emphatic scoreline after extra time does no justice to the drama that unfolded at Estadio da Luz as Atletico stood moments from winning the trophy for the first time only to end exhausted and well beaten.

Diego Godin capitalised on an error from Real's veteran goalkeeper Iker Casillas to give Diego Simeone's newly crowned La Liga champions a first-half lead, one they protected with fierce intensity until 90 seconds from the end of five minutes of stoppage time when Sergio Ramos headed in Luka Modric's corner. 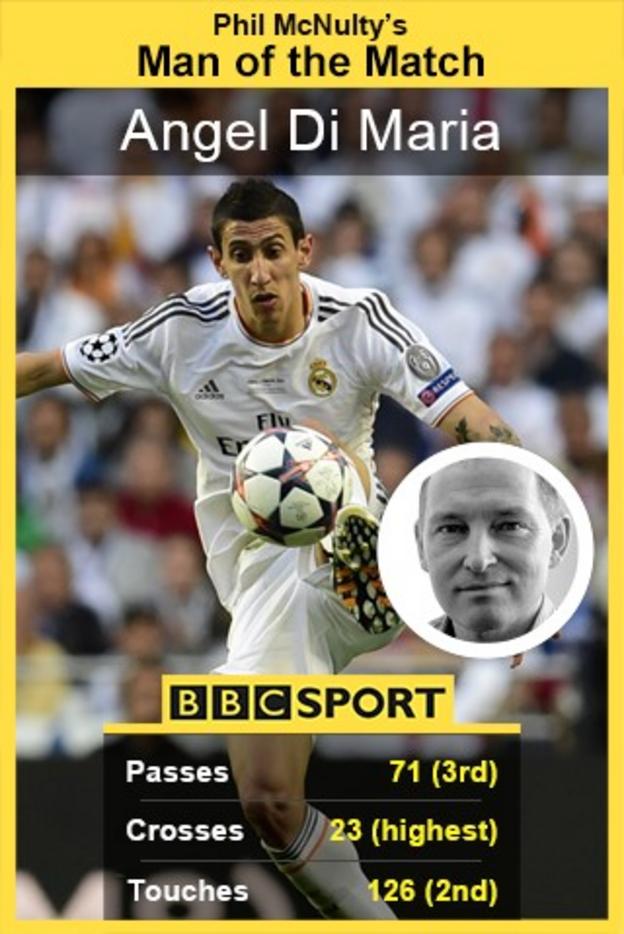 Atletico wilted visibly after that, and Real ruthlessly completed the job of becoming the first club to claim the trophy 10 times, an achievement known as "La Decima" (the 10th).

Bale, who had wasted earlier chances, headed in from an acute angle after goalkeeper Thibaut Courtois blocked Angel Di Maria's shot with 11 minutes left. This was effectively the match-winning moment.

The Welshman kept going despite not being at his best and this was the sort of contribution that he and Real had in mind when he made his £86m move from Tottenham last summer.

Substitute Marcelo added a third with a shot Courtois should have saved before Cristiano Ronaldo salvaged something from a disappointing personal performance, scoring his 17th goal of this Champions League campaign from the penalty spot after he was fouled by Gabi.

It was all too much for the combustible Simeone, the game ending amid chaotic scenes when he raced on to the pitch to confront Real's Raphael Varane and was sent off.

In contrast, the calm figure of Real coach Carlo Ancelotti was able to enjoy his own place in history alongside Bob Paisley, joining the former Liverpool manager as the only men to win the trophy three times as a coach having previously secured the crown twice with AC Milan, and twice as a player.

Gareth Bale spurned two clear openings in the first half, before twice firing wide after the break.

But when the crucial moment came, one month on from his Copa del Rey-winning goal against Barcelona, Bale remained calm in front of goal to put Real ahead.

After thoughts of "do not miss, literally, do not miss" passed through his mind, "it was great to see it go in", he said.

Real ultimately deserved the victory for their greater attacking intent but Atletico came so close to delivering another spectacular affirmation of their progress under Simeone.

The fitness of striker Diego Costa was a central topic of debate in the build-up, with the Spanish striker using horse placenta as part of his treatment for the hamstring injury he suffered when Atletico clinched La Liga for the first time in 18 years with a draw at Barcelona.

It was only nine minutes before the answer was delivered as a clearly unfit Costa signalled to the bench that he could not continue and was replaced by Adrian Lopez.

Ancelotti gambled on the fitness of Sami Khedira as a starter even though the German midfielder had only played an hour in six months after a knee ligament injury.

He had little chance to make an impact as the intensity of Atletico's approach - which also carried the occasional over-physical edge - offered no time and space for their creative players.

Real's best chance in the first half fell to Bale after 32 minutes when he was carelessly presented with the ball by Tiago but, after showing typical pace to surge into the area, he placed his shot inches wide.

Atletico took advantage and went ahead four minutes later, the responsibility for the goal lying predominantly with veteran Real and Spain goalkeeper Casillas.

He was indecisive as he rushed out recklessly to claim Juanfran's header back into the box, allowing Godin to nudge the ball over him as he desperately tried to recover his ground.

Ronaldo, who had also been an injury doubt with a hamstring problem, had been marginalised but finally got in on the action early in the second half with a free-kick that was turned away by Courtois.

He was then only inches away from getting his head on a cross from Ramos as Real looked to their talisman to haul them back into contention.

Ancelotti made his move with a double change just before the hour, sending on Marcelo for Fabio Coentrao and Isco for Khedira.

Bale had opportunities to bring Real back into the game but he was off target from the edge of the area and was wide again with an angled finish when his pace took him into the area.

Atletico's defending was becoming increasingly desperate but they showed great resilience, only to be denied deep into stoppage time as Ramos rose magnificently to direct Modric's corner past Courtois.

During the break before the restart, Atletico's drained and disappointed players were stretching out on blue mats laid out on the turf while the revived Real side gathered in a huddle to galvanise themselves once more.

It was a clear indication of how the momentum had shifted so significantly and those three goals in the second period of added time wrote another chapter in the history of this tournament's most successful club.