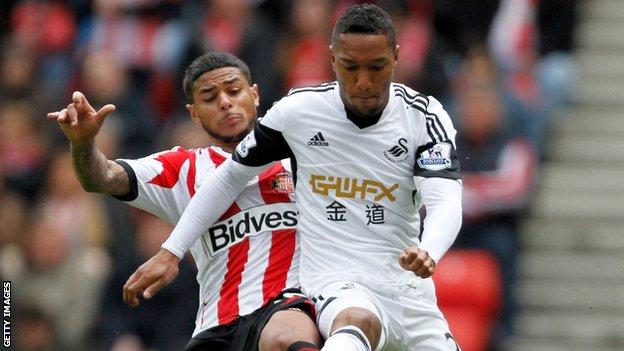 "We will talk to his club and agent to see what his thoughts are - as we did last summer," Swansea chairman Huw Jenkins said.

However, Leroy Lita and David Ngog have left after their contracts expired, while Roland Lamah and Alvaro Vazquez have completed their loans.

De Guzman has made 93 appearances for Swansea in two consecutive season-long loan spells at the Liberty Stadium.

Highlights of his stay include two goals in the 5-0 Capital One Cup final win over Bradford in 2013, and a spectacular free-kick in Swansea's historic 3-0 win at Valencia in the Europa League.

He is hoping to be named in the Netherlands squad for the World Cup on Wednesday, but added he was happy at Swansea and wants to stay.

"I've had a good chat with [manager] Garry Monk - he knows how I feel about Swansea", said the eight-times capped De Guzman.

"I have two more years left at Villareal, so we're basically waiting on the negotiation time and hopefully that will happen sooner than later.

However, Monk has already started to shake up his squad, with several players being released.

Lita was a £1.75m signing from Middlesbrough in August 2011, while fellow striker Ngog arrived in January on a short-term contract from Bolton.

Lamah has been on an 18-month loan deal from Osasuna, while Vazquez arrived from La Liga club Getafe in September.

Monk will not seek an extension for either player.

Darnel Situ, Oscar Sielva and Pau Morer will also be leaving the Under-21 squad.