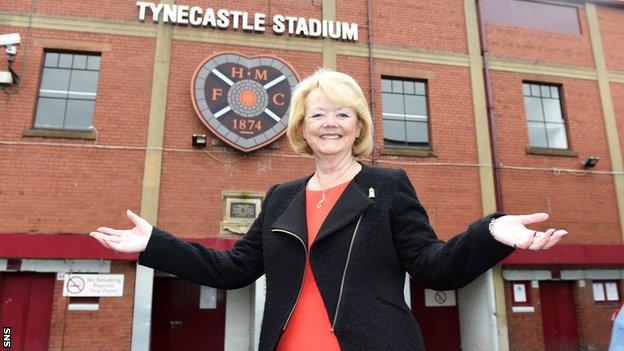 Hearts owner Ann Budge has insisted that next season will not just be about a return to the top flight but mending a "broken" club in the long term.

Budge's dramatic first day in control led to the dismissal of manager Gary Locke and the return of Craig Levein.

But she promised "changes on a major scale" throughout the relegated club.

"Of course, we will be striving for that," she said of the Premiership. "But we must take a longer-term view and build for the future."

John Murray, who had been director of football, will return to his role as chief scout, while the club will seek someone new to head their youth academy.

Levein will not only return to his former club in charge of footballing matters, with former Hearts defender Robbie Neilson as head coach, but is given a seat on the board.

Alongside him, Budge will be chairman and chief executive, with Robert Wilson, who was the Scottish Premier League's first chairman, being her deputy and director of strategic planning, business partner Eric Hogg her operations manager and MP Ian Murray there to represent fans group the Foundation of Hearts.

Another of IT millionaire Budge's business colleagues, Ann Park, will join Hearts as head of commercial operations.

"It was clear from my earliest visits to Tynecastle and my earliest meetings with senior staff that the company, Heart of Midlothian plc, was, in every sense of the word, 'broken'," she said.

"There was no overarching strategy for how the business should be run. For far too long, there had been no clear leadership.

"This, coupled with the sole focus on day-to-day survival, had left the club in a sorry and perilous financial state.

"This led to a fundamental disconnect between the various departments and a mountain of issues to be resolved.

"Add to this, the under-investment in various parts of the business and the current financial position, and we have a 'broken' Hearts. We must all realise that there is no quick fix for these problems."

Budge, through her Bidco 1874 consortium, struck a deal this month to buy the club from their former Lithuanian owners and is going through the legal process of taking the club out of administration.

"One thing is very clear," she said in a website statement. "We have come far too close to losing our very existence and we must never allow this to happen again.

"We must make changes. We must stop thinking short-term.

"We must put in place a three-five-year plan that will see our commercial activities totally re-vamped, such that they once again provide a solid financial under-pinning to our football club; and we must also completely revitalise and re-focus the football side of our club."

Budge said a key objective was to create a "coaching education programme" to unearth more of the "excellent young players who have done us proud in the last season".

"We will live within in our means to ensure that the future of the club is never again put in jeopardy," she added.

"We must ensure we have a clear footballing strategy that drives every aspect of our game; everything from who we recruit into our club, from youth academy through to first team players; how we approach coaching, at all age groups and all levels; how we undertake training and, indeed, what kind of football we play at Hearts."