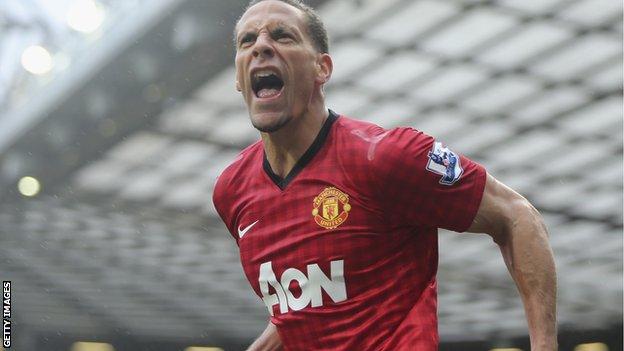 Rio Ferdinand will leave Manchester United in the summer after not being offered a new contract.

The 35-year-old defender's departure will bring to an end a 12-year stay at the club, for whom he has made 454 appearances, scoring eight goals.

"After 12 fantastic years, I have decided the time is right for me to move on," said Ferdinand.

BBC Sport has learned he intends to continue playing but his next club is still unknown.

United are believed to have told Ferdinand they want him to come back and be a 'Club Legend' going forward, in recognition of what he achieved during his time with the club.

The position is an ambassadorial role that several other significant players from the club's past have accepted.

He made his final appearance for the Old Trafford club in the 1-1 draw at Southampton in the final game of the season on Sunday.

In an open letter on his website, Ferdinand added: "I have thought long and hard over the last few months about my future.

"Circumstances didn't allow for me to say goodbye the way I would have liked but I'd like to take this opportunity to thank my team-mates, staff, the club and the fans for an unbelievable 12 years that I'll never forget. Winning trophies I dreamed about as a kid came true at this great club.

"I am feeling fit and healthy, ready for a new challenge and looking forward to whatever the future holds for me."

The club tweeted: "#mufc would like to thank Rio Ferdinand for his long and distinguished service, and wish him well for the future."

Ferdinand made his United debut against Hungarian side Zalaegerszeg in a Champions League tie in August 2002 after joining from Leeds for a then British record £30m.

Although he initially struggled with injury, he eventually became a key part of the side that won the 2002-03 Premier League title.

However, he was banned for eight months after being found guilty of missing a drugs test in September 2003.

Ferdinand did not return until the following year but soon established himself again as an important player for the club as he helped them to the 2006-07 league title.

United successfully defended the trophy in a season they also won the Champions League, with Ferdinand captaining the side to a dramatic win over Chelsea on penalties in Moscow.

A third successive Premier League title followed, with Ferdinand once again crucial to the club's success, but he struggled with injuries over the next two seasons.

However, he was a virtual ever present in 2011-12 as United just missed out on league success to rivals Manchester City.

He then earned a place in the PFA Team of the Year as United won the Premier League in 2012-13.

He was rewarded for his performances with a new one-year extension to his contract, keeping him at the club until this July, but struggled to hold down a regular place in the side under David Moyes as he finished the season with just 14 appearances.