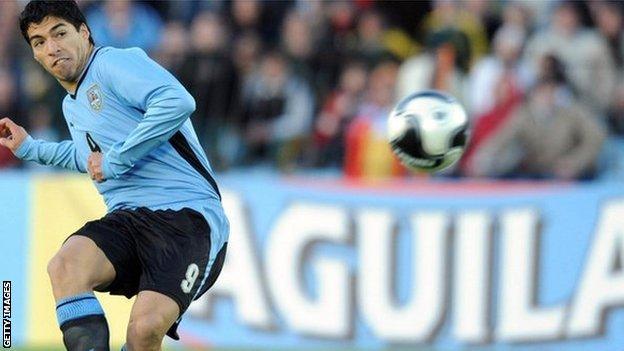 Suarez, 27, had an operation on 22 May to repair meniscus damage, but hopes to play in his country's opening Group D match, against Costa Rica on 14 June.

Three other Premier League players have been selected by coach Oscar Tabarez.

Suarez has told Liverpool team-mate Glen Johnson he thinks he will be "OK" for the game against England on 19 June.

Coates, 23, spent the second half of the season on loan at former club Nacional after recovering from a knee injury that meant he missed Uruguay's last four South American qualifiers and the play-off win over Jordan.

Former Manchester United striker Diego Forlan, 35, will take part in his third World Cup, having played and scored at both the 2002 and 2010 tournaments.

After facing Costa Rica and England, Uruguay conclude their Group D fixtures with a game against Italy on 24 June.