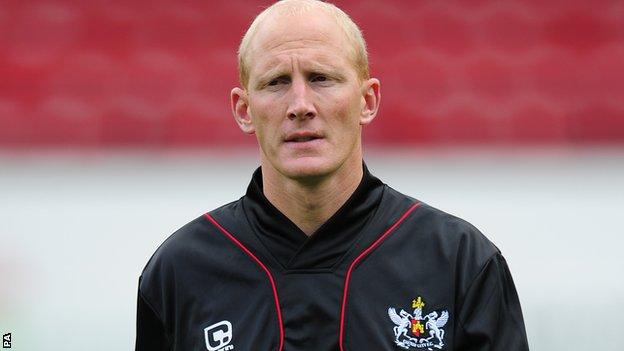 Having joined the Grecians from Blackpool in 2006 he played 179 games before retiring as a player in 2011.

"I am very much looking forward to furthering my career," Edwards said.

"It is disappointing to be leaving right now as everyone can see a really talented crop of young players coming through after many years of commitment from all the coaching staff."

The former Wales international added: "Despite moving on, I will always think fondly of everyone at the club - in particular the hard-working people around the club, players supporters and volunteers and I consider myself very fortunate as I really enjoyed the last years of my playing career."

Exeter manager Paul Tisdale was full of praise for Edwards, who he recruited to his coaching staff in 2008.

"Rob has played a huge part in the progress made at Exeter in recent years," Tisdale explained. "His performance on the pitch raised the bar when he arrived in 2006 and was a pivotal factor in our back-to-back promotions.

"However, his largest contribution will be the way his professionalism and character helped to improve many Exeter City players over his eight years at the club, both on and off the pitch.

"I consider him to be my most important signing during my time at Exeter City and will always be grateful for the immense value he added both as a player and as a coach.

"I expect him to develop his coaching further and go onto a very successful career. I will miss him as the very thoughtful and diligent assistant manager he proved to be over the past few seasons."