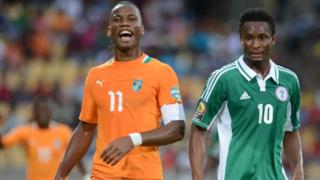 Cameroon, 1990 quarter-finalists, have reached an African-record seventh World Cup, while Ghana are making their third straight appearance after agonisingly missing out on a semi-final berth in 2010.

Algeria are at a World Cup for a fourth time, but like Ivory Coast (third appearance) have yet to advance from the opening group stage.

While Nigeria are making their fifth trip to football's biggest stage and reached the round of 16 in both 1994 and 1998.