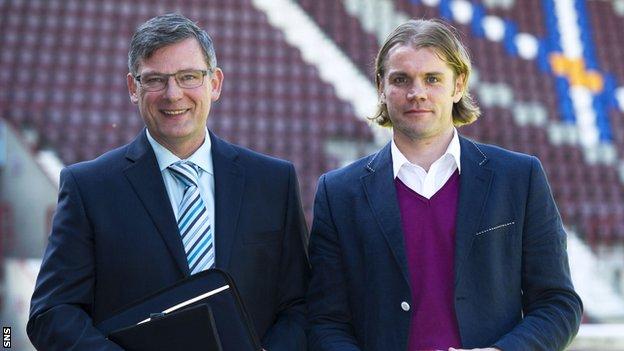 Levein, addressing a media conference on Tuesday, said difficult decisions had to be taken at the Edinburgh club.

Neilson stressed that he would pick the team in the Championship next season but would discuss his selection with the director of football.

Budge, through her Bidco 1874 consortium, struck a deal this month to buy the club from their former Lithuanian owners and is going through the legal process of taking the club out of administration.

And she has vowed to mend the "broken" club as is seeks to make an immediate return to the top flight.

Levein conceded that delivering news of the changes had proved difficult.

"Trust me, yesterday was a hugely difficult day," he said. "I have got a lot of respect for Gary Locke and a lot of time for him as a person.

"The last thing I wanted to do was tell Gary Locke there wasn't a role for him in this new structure. But ultimately that is the fact."

Neilson said he had sought and received assurances over his role in the new management structure.

"I will pick the team," said the new head coach. "When Craig spoke to me on Sunday night that was one of the questions I asked him and he assured me I would pick the team. That's the reason I'm sitting here."