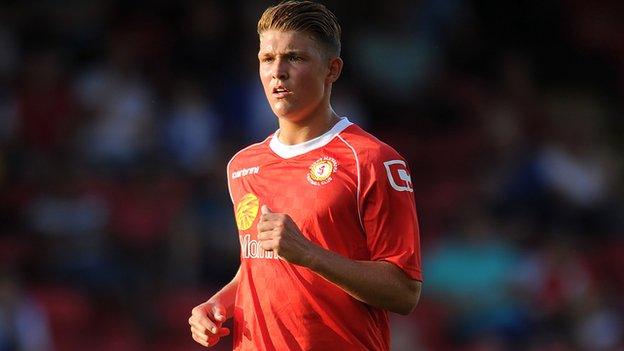 Crewe director of football Dario Gradi says he will do all he can to try and keep Max Clayton at the club.

The England Under-19 striker has so far refused to sign a new contract that has been on the table for 18 months.

And while Crewe are guaranteed a fee for their Academy product as Clayton, 19, is still under 24, Gradi at least wants to avoid him being sold cheaply.

"I'd like to think there's still a chance Max may re-sign here and see how things go," Gradi told BBC Radio Stoke.

"But we're a little bit away from that yet."

Clayton was a target for Manchester United as a raw 17-year-old two summers ago when fellow Alex striker Nick Powell went to Old Trafford for £3m, but opted to stay at Gresty Road to further his development.

He scored nine times in his first full season in 2012-13, including the goal that clinched the club's Johnstone's Paint Trophy victory over Southend at Wembley.

But he netted just twice this season before being ruled out for the next five months when he broke his ankle in the FA Cup first round tie with Wycombe in November.

Although Clayton was fit to return before the end of the season, he was not risked in Crewe's ultimately successful fight against relegation - but did score the winning goal for the club's Under-21 side in the Professional Development League Two Final at Queens Park Rangers a fortnight ago.

"The first thing to see is who wants to buy him and how much they're prepared to pay for him. And that won't be easy as he hardly played last season," added Gradi.

"We'd like to have thought we could have got £3m for him too. He hasn't played, and we haven't picked him, so that's unlikely to be the figure now.

"If someone thinks they can come in and grab him for next to nothing, they'd have to stand up against that.

"What I will try to do is not to allow greed on anybody's part, theirs or ours, to prevent him from having a career."

Meanwhile, as Crewe await the next hot prospect to emerge from their youth ranks, they have signed eight-year-old Cassius Cisse, son of Djibril Cisse, a Champions League winner with Liverpool in 2005.

Cisse turned down overtures from United, Everton and his father's old club Liverpool to enrol at the Crewe Academy.