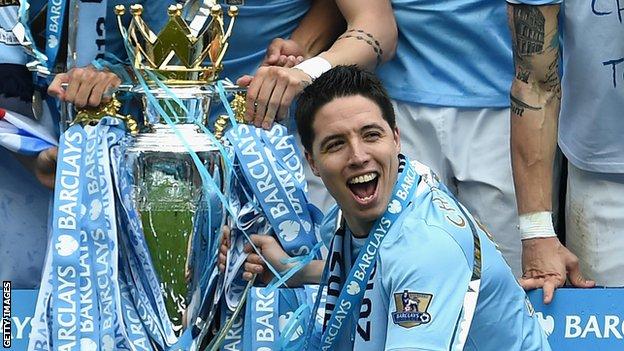 Club-mate Gael Clichy was also not selected by Didier Deschamps.

I built the best squad, I did not pick the 23 best French players

Nine of the 23-man squad play in England, including QPR striker Loic Remy, who has been on loan at Newcastle this season.

France's first Group E match is against Honduras on 15 June and they also face Switzerland and Ecuador.

Southampton midfielder Morgan Schneiderlin was on the seven-man standby list.

Nasri, who was given a three-match international ban for his behaviour during Euro 2012, predicted his exclusion from the squad earlier this week.

He said: "Sadly it's not going to happen, but that's fine. I am just happy I won the league and a cup this year. If that is not enough, it is not enough.

"I missed a World Cup in 2010 and I am still alive and stronger than ever. I am going to watch it on TV while I am on holiday and I will be fine."

However his girlfriend was less accepting of the news, posting a number of expletive-filled comments on social media criticising French football and manager Deschamps.

Deschamps told French TV channel TF1: "Samir is an important player for Manchester City but he has not performed that well with France.

"He is a starter at City, which is not the case with France and he has made clear that he is not happy when he is not (a starter), and I can tell you it can be felt in the squad.

"I built the best squad, I did not pick the 23 best French players."

St Etienne goalkeeper Stephane Ruffier was later called up to the squad after Marseille's Steve Mandanda suffered a neck injury.

The other standby players to miss out on the full squad were Loic Perrin (St Etienne), Maxime Gonalons and Alexandre Lacazette (both Lyon), Benoit Tremoulinas (Dynamo Kiev) and Remy Cabella (Montpellier).