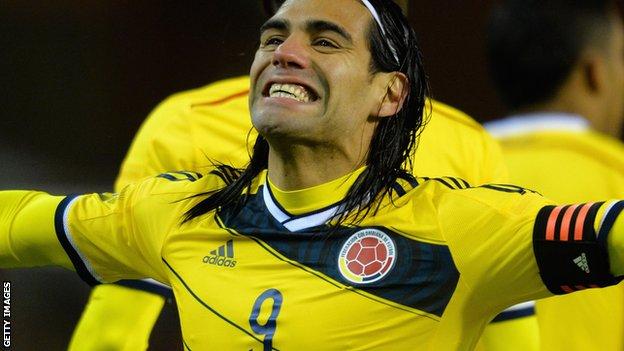 Colombia striker Radamel Falcao will miss the World Cup after he was left out of his country's final 23-man squad.

The 28-year-old Monaco player has not played since sustaining anterior cruciate ligament damage in January.

He had been included in Jose Pekerman's provisional 30-man party.

But Falcao - who scored nine goals during Colombia's qualifying campaign - has lost his race to be fit in time for the finals in Brazil.

Morelia midfielder Aldo Leao Ramirez was a late withdrawal from the squad through injury. He has been replaced by River Plate's Carlos Carbonero.

Colombia are drawn in Group C with Greece, Ivory Coast and Japan.

Pekerman's side play their first match against Greece on 14 June in Belo Horizonte, before meeting Ivory Coast on 19 June and Japan on 24 June.

Defender Pablo Armero, who spent the second half of the season on loan at West Ham, is the only player that featured in the Premier League this season in a squad that also contains Monaco's £38.5m midfielder James Rodriguez.