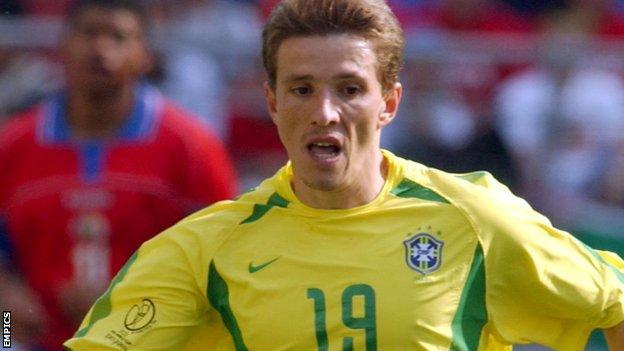 Juninho, 41, won the World Cup with Brazil in 2002 and joins a star-studded line-up across TV, radio and online for the summer's event.

He is likely to be involved in coverage of Brazil v Mexico on 17 June.

He adds to the likes of Thierry Henry, Rio Ferdinand, Clarence Seedorf and Brad Friedel on the BBC in Brazil.

Juninho first joined Middlesbrough in 1995 and was part of the side which lost two cup finals in 1997 before being relegated.

He returned on loan from Atletico Madrid in the 1999-2000 season and then for a third and final spell after winning the World Cup in 2002, winning the 2004 League Cup. He then spent several months at Celtic.

There will be 31 matches shown live on BBC television and online, starting with Spain v Netherlands on Friday 13 June, with 24 days of live coverage on BBC Radio 5 live.

England's first group match against Italy is live on BBC One on Saturday 14 June.

There will be live text commentary on all 64 matches throughout the tournament, available on the BBC Sport website and app for mobile, tablet and connected TV.