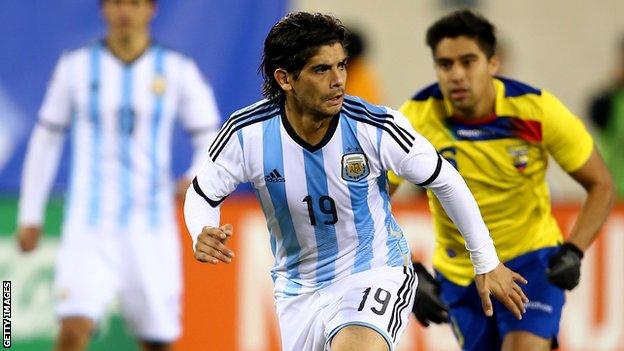 Ever Banega was the most high-profile player excluded as Argentina confirmed their final 23-man World Cup squad.

The Newell's Old Boys midfielder was cut from the provisional 26 along with Jose Sosa of Atletico Madrid and Atletico Mineiro's Nicolas Otamendi.

Forward Lamela, 22, joined Spurs for a club-record fee of £26m from Roma last summer but has suffered a series of injuries and made just 10 starts this season.

Sabella did not consider Tevez, despite his 19 goals in Serie A this season. There is also no place for Paris St-Germain midfielder Javier Pastore.

Manchester City defender Martin Demichelis is included after winning the Premier League title in his first season at the Etihad Stadium.

The centre-back, who played in the 2010 World Cup, has not featured for his country since a 1-1 draw at home with Bolivia in a qualifier in November 2011.

Sabella has also selected injured midfielders Fernando Gago, Augusto Fernandez and Angel Di Maria, who hope to be fit in time for the finals, which start on 12 June.