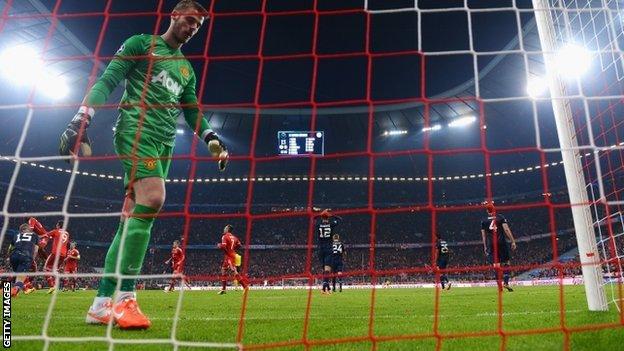 United's seventh-placed finish was their worst since the 1989-90 season.

Speaking to investors, Woodward also touched on United's managerial vacancy, saying: "We are focused on bringing in a manager. An announcement will be made in due course."

He added the club was in "a healthy position to invest in the squad."

We will be active in the transfer market. The window is upon us and deals are being done

BBC Sport understands Netherlands coach Louis van Gaal has agreed a three-year contract to replace the Scot, who was sacked in April.

Van Gaal held talks with Ryan Giggs in the Netherlands on Wednesday and is thought to have offered the 40-year-old United player, who took charge of the team for the final few games of the campaign, the role of assistant manager.

The appointment of Van Gaal, 62, is now likely to be at some point after the Dutch play a friendly against Ecuador in Amsterdam on Saturday.

In his conference call, Woodward confirmed the cost of a poor season under Moyes goes beyond the hit United will have to take in lost revenue from European competition.

As well as a pay-off in the "single-digit" millions to Moyes, who was appointed in May last year to succeed Sir Alex Ferguson, the club must pay off his backroom staff of Steve Round and Jimmy Lumsden.

Woodward also said United had cut 15% off the price of their executive facilities but underlined their intent to return the club to its former status.

"We will be active in the transfer market," he said.

"The window is upon us and deals are being done but nothing has been announced and no committed funds.

"Everyone at the club is working hard to ensure the team is back challenging for the title and trophies next season."

Woodward was answering questions on third quarter figures, which show substantial increases in both commercial and broadcasting revenues.

However, the club's wage bill is also 18.9% higher. That figure includes the arrivals of Juan Mata and Marouane Fellaini last season, plus new deals for Nani and Adnan Januzaj.

Interestingly, Wayne Rooney also signed his new contract during the period concerned, but it is not thought the striker's deal resulted in any material wage rise.

Instead, United will provide commercial personnel and expertise to assist in maximising the revenue from his personal image rights.