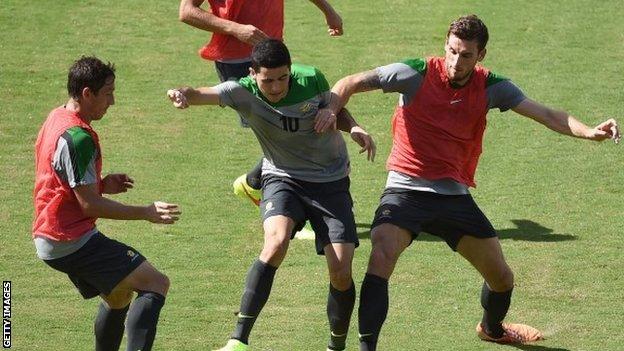 The 21-year-old, on loan at Melbourne Victory, was one of four players cut from a provisional 27-man selection.

League One players Bailey Wright and Massimo Luongo are in the squad.

Preston defender Wright is uncapped and Swindon midfielder Luongo, also 21, made his international debut this year.

New York Red Bulls forward Tim Cahill, 34, is included in the squad, but Lucas Neill, 36, was overlooked from the provisional 30-man squad.

The Watford defender, who has won 96 caps, spent the end of the season on loan at Doncaster in an attempt to secure a place.

Australia are in Group B with defending champions Spain, 2010 runners-up Netherlands and Chile.

Newcastle United defender Good has not played since suffering a hip injury in March, while midfielder Sarota has been making a comeback following knee surgery.

Midfielder Brillante has been deemed surplus to requirements.