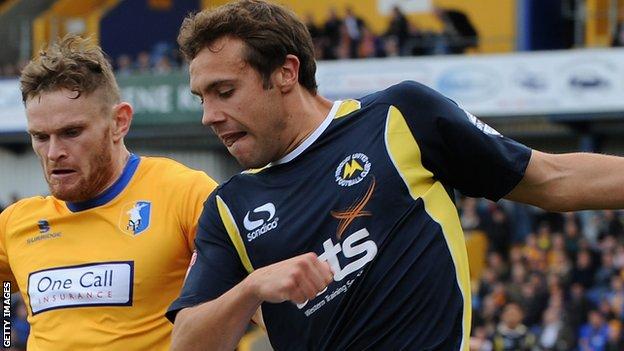 The 22-year-old, who scored three goals in the final two months of the season, is the first player to sign a new contract since Torquay were relegated from the Football League.

Meanwhile Ben Harding and Elliot Benyon have been added to transfer list.

Yeoman, who spent time and this season, scored the winners against and as Torquay failed to beat relegation.

He made his debut as a 16-year-old in October 2008 but has failed to establish himself in the side properly since.

''The summer has come at the wrong time, again,'' said Yeoman. ''It was the same last year because I didn't look like having a chance around February and March.

''I went out on loan to play some games and came back here for the end of the season. Fortunately, I scored some big goals in big games and that has obviously helped.

''I always knew I had a slight chance of being involved and the winner against Bury was probably a breakthrough night for me.

"I wasn't playing particularly well on the night but the ball dropped for me in the right place, and it was amazing to score."

The former Arsenal defender has been hampered by a hamstring injury, restricting him to just 22 appearances this season, having joined on a free transfer in the summer of 2012.

Harding, 29, but made only 18 starts after suffering a foot injury in October.

Benyon, 26, who after a loan spell, scored just three goals this season.

Harding and Benyon's addition to the transfer list brings the number of Torquay players Hargreaves is hoping to offload up to eight, after he following the club's relegation to the Conference Premier.

Hargreaves also revealed he will be offering a winger and a striker to chance to prove themselves in pre-season, after impressing in a trial game on Monday.

''They both excelled and will be in pre-season for us, with a view to signing next season.

''They both look like they could do some real damage in the Conference,'' he said.