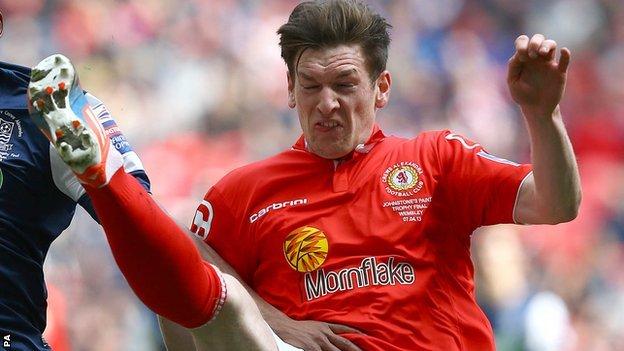 Crewe captain Matt Tootle is ready to become the latest academy graduate to play at a higher level, says the Alex's director of football Dario Gradi.

The 23-year-old Liverpudlian, who took over the captaincy when Luke Murphy made his £1m exit to Leeds United last summer, swept the board at Crewe's end-of-season awards night.

And Gradi thinks Tootle is at least capable of playing in the Championship.

"He could play a league above, maybe even the Premier League," said Gradi.

"Whether he's quite up to that standard, we won't know until he does it, but he's ready to move on."

Full-back Murphy was the last in a long line of Crewe players to move on to bigger things last summer, following the seven-figure departures of Nick Powell to Manchester United and Ashley Westwood to Aston Villa in 2012.

Former Crewe boss Gradi, now running the Alex academy after handing over the managerial reins to Steve Davis in November 2011, is vastly respected throughout football and remains a key figure in the Crewe hierarchy.

Although he is not convinced that the time is yet right for one of his former charges Max Clayton to move on, he perceives Tootle, fresh from helping Crewe stay in League One, as the finished article.

Gradi even likens Tootle to Rob Jones, who cost Liverpool £300,000 when he moved to Anfield back in 1991 and went on to win eight caps for England, a tally that would have been more had his career not been wrecked by a knee injury.

"If he'd got Rob Jones's pace, without doubt he could play in the Premier League," Gradi told BBC Radio Stoke.

"He was pretty much the last choice as a scholar, so he's done remarkably well to get as far as he has already.

"He's a really good attacking full-back, who can defend. And his temperament is excellent.