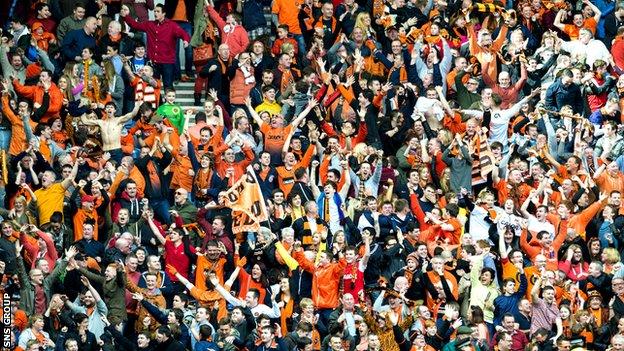 Playing in front of their biggest-ever gathering of fans can inspire Dundee United to victory in the Scottish Cup final, says Stuart Armstrong.

United expect to take more than 28,000 supporters to Celtic Park to face St Johnstone on Saturday.

"It was a great atmosphere at Ibrox for the semi-final and I think we will have nearly three times that at Celtic Park," said midfielder Armstrong.

"It is a great boost for us and we can't wait."

United finished a place above St Johnstone in the Scottish Premiership table, but the Perth side have won three of their four meetings this season.

But Armstrong said: "Considering it is a cup final, it will come down to who deserves it on the day.

"Anything can happen on the day and, despite previous games, we are very much of the opinion that, if we put in the right performance, we can come home with the cup.

"There's a lot of excitement, especially now it's here and the week to the build up to the final."

Armstrong has been linked with a move away from Tannadice after the 21-year-old's mature performances this season in a much-praised youthful team guided by manager Jackie McNamara.

"If these players are allowed to gel and play together for a prolonged period of time, of course they'll get better," he told BBC Scotland.

"In football, new players will come in and maybe other players will leave, but to see what we've done with such a new team this season, it's exciting to think what we could do with more experience playing together.

"At the start of the season, we had a lot of younger players, a relatively new team who had not played together before, so to finish as high as we did and win a cup would be fantastic.

"There has been a lot of praise this season for the way we've played and to win on Saturday would round off a terrific season for us."

Team-mate Ryan Dow is also aware of how close United are to lifting the trophy for the first time since 2010.

"It would be a dream come true and would be an unbelievable achievement," said the 22-year-old midfielder, who this week signed a contract extension at Tannadice.

"It is a great stadium and it's close to the park, so the atmosphere will be brilliant."

"It is a huge occasion, the Scottish Cup final, nearly a full house - probably by the time we get there, we'll have sold over 28,000 tickets - the biggest United support ever at any game, which if fantastic," he said.

"The club means everything to me. I fight for the cause, for the club, and three o'clock on Saturday it's just about being a fan really."