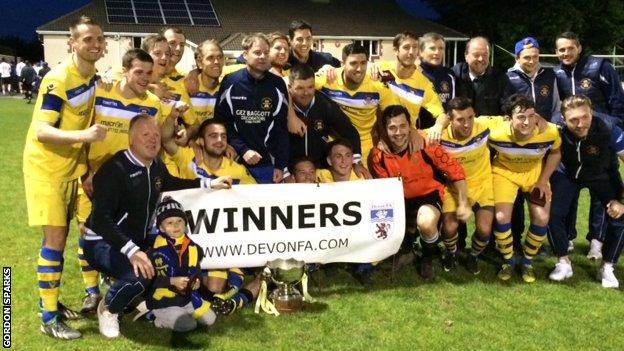 Having already beaten Exeter City in the semi-finals, Parkway defeated Tiverton Town 2-0 in the final at Newton Abbot as Levi Landricombe struck twice in the second half.

It was club's first St Luke's win in its 26-year history.

Tiverton boss John Clarkson resigned from his job after the defeat.

"It was a great team performance so I cant take all the credit," Landricombe told BBC Radio Devon.

"During the first half we were a bit quiet but, in the second half, we found a lot of space."

Parkway had to win their final game of the season to clinch the league title before winning Sunday's Throgmorton Cup final.

"To do a double is special but the treble is marvellous.

"I'm buzzing for everybody at Plymouth Parkway but especially the players as they fully deserve this and it proves what a fantastic season we've had."