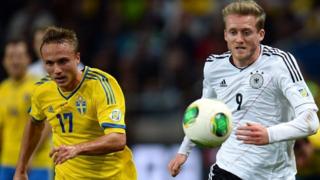 Highlights of an eight-goal thriller between Sweden and Germany in qualifying for the finals, which saw the Germans come from behind to win 5-3 in Solna.

Tobias Hysen scored his first of a brace early on for Sweden, before Alexander Kacaniklic made it two, then Mesut Ozil and substitute Mario Gotze scored either side of the break and a fine hat-trick from Andre Schurrle capped off the win for Germany.

The Germans qualified top of their group, with Sweden losing out to Portugal in a play-off.