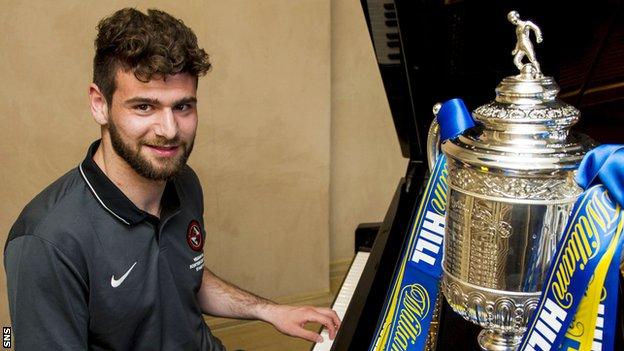 Turkish striker Nadir Ciftci aims to repay Dundee United for their faith in his talents by helping them lift the Scottish Cup on Saturday.

The 22-year-old joined United after leaving Breda only one season into a three-year contract with the Dutch.

"Everyone has been terrific to me, making me feel welcome and at home and hopefully I can give them something back this season," said Ciftci.

"Winning the cup would be the best thing to give them back."

Ciftci, who had been with Portsmouth and Kayserispor before moving to the Netherlands, has scored 17 goals in 39 appearances during his first season in Scotland's top flight.

"It has been really good for me and I have to thank all the boys and the manager, the staff and the fans for helping throughout the season," he told BBC Scotland.

"Not just football but mentally, I've been improving a lot and I thank the management staff for that."

Ciftci believes he can receive his first senior winners medal with United, who finished above opponents St Johnstone in fourth place in the Scottish Premiership.

"For any club, winning the Scottish Cup would be big and especially this club," he said.

"I've had dreams and everything about it, so we're looking forward to it. Everyone is buzzing obviously and especially after a season like this.

"We've played really good football and we want to win a trophy on top of it and hopefully it will be a good end to the season.

"There's a lot of young, talented players in the squad and the expectation level of them is already high because they've shown how good they are.

The expectations of them in the final will be high as well."

United expect to sell more than 28,000 for the match at Celtic Park, which will host the biggest-ever gathering of United fans.

"If you look at how many tickets have been sold, it's been terrific and the fans definitely see us holding the cup," added Ciftci.

"For me, it would be something special and something I would never forget."