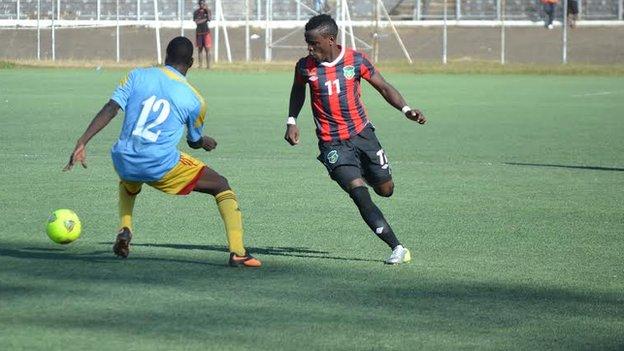 Malawi began their campaign to reach the 2015 Africa Cup of Nations finals in Morocco with a 2-0 win over visiting Chad on Saturday.

Frank 'Gabadinho' Mhango (pictured), who plays for Bloemfontein Celtic in South Africa, was the hero for the Flames scoring both goals of the first round first leg tie.

In front of a capacity crowd in Blantyre Mhango tapped in from a rebound in the seventh minute after the Chad keeper Mbiramanji Dilla had tipped Joseph Kamwendo's free kick onto the post.

Mhango's second came with 21 minutes left on the clock with a solo effort that saw him go past the Chad defence before beating the advancing keeper.

Despite the loss Chad coach Emmanuel Tregoat was still confident his side can come back in N'Djamena in a fortnight.

"I think we can win [in a fortnight]- and we can win 2-0 or more perhaps, or penalties, it's not finished for us," he insisted.

While his opposite number Young Chimodzi added his side would not be trying to defend their two goal advantage.

"We will devise a plan for how we can approach the game - because what we need is to get a goal," he told BBC Sport.

"If we get a goal then we are safe and and that's what we are aiming for - not just to go there and defend and defend."

The winners of the tie will play either Benin or Sao Tome Principe.

Benin produced a vital 2-0 victory in Sao Tome to take a big advantage into their home leg.

Both goals came in the last 10 minutes and both were scored by West Bromwich Albion's Stephane Sessegnon, including a last gasp penalty.

Also on Saturday Namibia edged past Congo Brazzaville 1-0 with a last minute goal in Windhoek.

Another South Africa-based player Rudolf Bester latching onto a long ball from the back to seal the victory.

Bester, a second-half substitute, thought he had scored minutes earlier with a header but he was ruled offside.

Mauritania also have a slender advantage after Saturday's first round first leg match are they defeated Equatorial Guinea 1-0 in Nouakchott.

The only goal of the game was scored in the 76th minute by Ismael Diakite, who plays his club football in Tunisia for Hamman Lif.