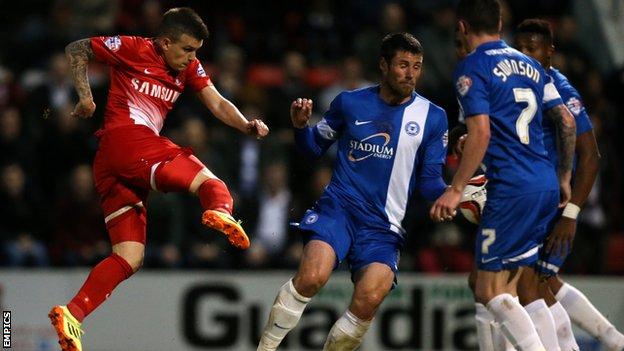 Leyton Orient winger Dean Cox says their League One play-off semi-final win over Peterborough was a night which will live long in the memory.

The O's beat Posh 2-1 on Tuesday to win 3-2 on aggregate, sealing a place at Wembley and sparking a pitch invasion.

"The place absolutely erupted. They are great memories that will live long in the history of Leyton Orient," the 29-year-old told BBC London 94.9.

"People didn't fancy us. Boy, have we proved them wrong."

Dean Cox's goal against Peterborough in the play-offs was his 16th of the season.

With the second leg level at 1-1 after Saturday's draw at London Road, Orient took the lead on the hour when Cox volleyed in after his free-kick had been blocked.

They extended their advantage with two minutes remaining when Chris Dagnall poked home before Conor Washington set up a tense finale by pulling a goal back in stoppage time.

However the O's held on and will face either Rotherham or Preston, who play the second leg of their semi-final on Thursday, in the play-off final on Sunday, 25 May.

"It was frantic in the first half and we had a few chances we should have scored from," Cox added.

"We bided our time and from the free-kick it came back to me, I got my body over it and luckily it went in.

"I slid and fell over and everyone was lying on top of me.

"We're now looking forward to Wembley. Whoever we get it will be a tough task, as both Preston and Rotherham have given us difficult games over the course of the season.

"I'm sure 25,000 Orient fans will come screaming and the boys will give it their all."

Orient, who last played in the second tier in 1981-82, finished third in the League One table.

We have got the best manager anyone in the lower leagues could want, and a squad of players who would take a bullet for each other

Boss Russell Slade shared the division's manager of the year award alongside Wolves' Kenny Jackett and O's chief executive Matt Porter says their achievements this season are the culmination of a lot of hard work on and off the pitch.

"We are the Cinderella club that everybody likes to pat on the back and say 'Good old Orient'," Porter told BBC London 94.9.

"This year we have taken a massive step forward towards where we want to be, which is in the second tier.

"Sometimes in life everything comes together at once, every piece of the jigsaw fits and everybody pulls in the same direction.

"We have got the best manager anyone in the lower leagues could want, a squad of players who would take a bullet for each other and a set of fans who are on a rollercoaster and have seen everything working in unison.

"We achieved our aim, which is put ourselves in a position where we can get promotion.

"This group never gives up. It is in their minds and they will never give up until we are in the Championship."