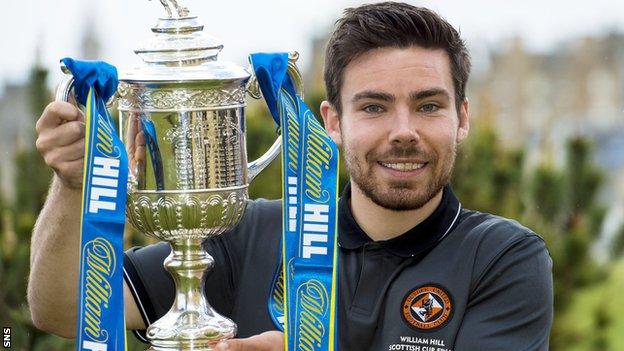 Dundee United view 27-goal St Johnstone striker Stevie May as the main stumbling block between themselves and lifting the Scottish Cup on Saturday.

But United forward Ryan Dow thinks his side can record only their second win against Saints this season.

"They are a good side throughout and Stevie May's done brilliantly - he's a very good player and he'll be a handful for any team," Dow told BBC Scotland.

"They won the last couple of games, but we can turn it around on Saturday."

United swept Saints aside 4-0 in their first meeting of the season at Tannadice in August, but St Johnstone won the next three, scoring six goals without reply.

"They have played well in the last couple of games they've played against us, but in the first game of the season, everything clicked, we played well and won," said Dow.

"When everything clicks, we really play well and we're hoping it all goes right for us on Saturday."

United's youngsters have been in the spotlight this season, but Dow pointed out that they also have experienced Cup winners in their side.

"A lot of the boys have not been involved in a game like this before, although a few - like Sean Dillon, Keith Watson and Morgaro Gomis - they've all tasted success in 2010," he said.

Midfielder Stuart Armstrong stressed that United will focus on their own formation rather than concentrating on their opponents' strengths.

"The obvious one is Stevie May, who's bagged at lot of goals this season, so the boys at the back will be wary of him," he admitted.

"But the team's full of experienced players who have played a number of games at this level and know how to win. So it will be a difficult task.

"The emphasis this season has been focusing on ourselves rather than the opposition and that's what we'll be doing again on Saturday.

"Of course we are wary of key players that they have, but we are focusing on our play."

"We have lost three out of four and won one and that says how tough a game it will be," he said.

"But this is a cup and is only one game, so it's a different kind of atmosphere, the mentality will be different."