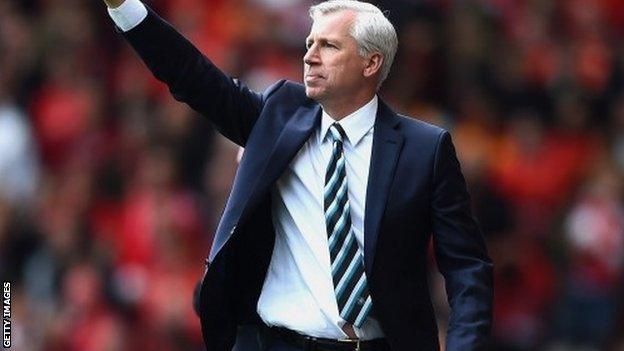 Alan Pardew will remain as Newcastle's manager according to the club, who responded to rumours that they had been talking to other candidates.

Reports in France last week suggested that the club had been linked with St Etienne coach Christophe Galtier.

Club officials clarified the situation at a fans' forum on Monday outlining that "incorrect media reports" would be looked at by their legal team.

It was a difficult finish to the season for the Magpies. They started 2014 in eighth position with 33 points from 19 games - only four points off a Champions League spot.

But after the departure of influential midfielder Yohan Cabaye to Paris St-Germain at the end of the January transfer window, Newcastle's form dipped dramatically, picking up only 16 points from the following 19 fixtures.

Banners calling for Pardew to leave were paraded at matches in the second half of the campaign, while the manager suffered the ignominy of a seven-game ban for his headbutt on Hull's David Meyler during his side's 4-1 win at the start of March.

The former Southampton and West Ham manager succeeded Chris Hughton in 2010 and was then rewarded with an eight-year contract for guiding the Magpies to fifth during the 2011-12 season.

However, the St James' Park club finished only 16th the season after and struggled again during the latter half of the 2013-14 campaign.