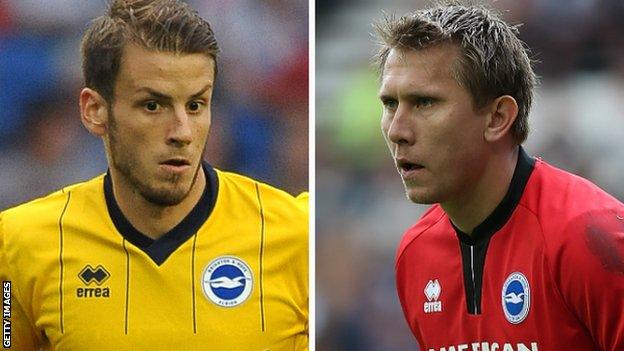 It is something which has been under discussion and review with Oscar for a number of weeks. The final decisions have been taken with input from David Burke, Nathan Jones and me

Albion chairman Tony Bloom stressed that the decision on which players to release had been under review for several weeks, with head of football operations David Burke and assistant coach Nathan Jones involved in the process.

"It's obviously important we let the players know where they stand and give them clarity as early as possible," Bloom told the club website.

"We had held off from making these decisions until now at the request of Oscar Garcia. He felt it was important for the unity within the squad in the final weeks of the campaign that we waited until the end of the season.

"It is something which has been under discussion and review with Oscar for a number of weeks. The final decisions have been taken with input from David Burke, Nathan Jones and me.

"On behalf of the club, I would like to thank Peter, Will, Tomasz, Andrea, David Lopez and David Rodriguez for their efforts and wish them all the very best for the future."

Poland international Kuszczak, 32, moved to Brighton from Manchester United on a free transfer in summer 2012 and made a total of 89 appearances for the Sussex club, while fellow keeper Brezovan, 34, featured 62 times after joining in late 2009.

Midfielder Lopez arrived at the Amex Stadium at the same time as Orlandi, on a free transfer after leaving Athletic Bilbao, and the 31-year-old went on to score 12 goals in 71 games during his spell on the south coast.

Striker Hoskins joined from Bristol Rovers for a fee of around £500,000 in summer 2011, but suffered several injuries whilst at the Amex Stadium.

The 28-year-old only started six games for Brighton, scoring two goals in a total of 21 appearances, and missed the whole of the 2013-14 season after suffering a cruciate ligament injury in February last year.

Rodriguez, 28, was a January arrival and scored once in 12 outings for the Seagulls.