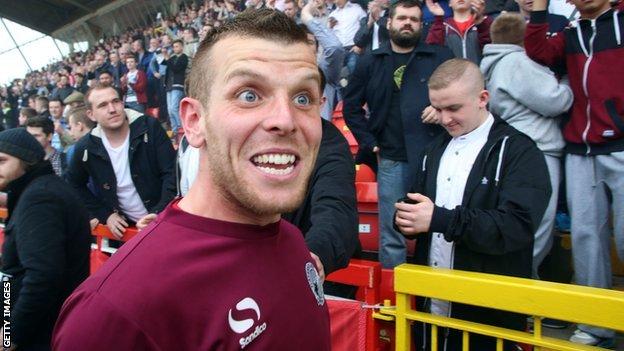 Adam Bartlett says he feels "part" of Gateshead's run to the Conference Premier play-off final, in contrast to his last Wembley appearance - for Sunday's opponents Cambridge in 2009.

Bartlett, 28, played all 90 minutes of United's defeat by Torquay at the same stage of the play-offs five years ago.

The final was his one appearance for Cambridge on an emergency loan.

"To be thrown in at the deep end was fantastic but I hadn't really earned it," the goalkeeper told BBC Newcastle.

I enjoyed the day, Cambridge were beaten that day but personally as an out-of-contract player to get that kind of exposure at such late notice was fantastic

"This time I've earned it and hopefully Gateshead can go and get the win."

Since arriving on Tyneside, Bartlett has been a regular with Gateshead and a key member of the squad with 18 clean sheets.

His arrival at Cambridge was very different, joining the club on an emergency loan just prior to his exit from Kidderminster at the end of the 2008-09 campaign.

"It was pretty surreal, I'd been called up to the England C squad, so I was in Oxford on the Friday and I got a phone call to say Cambridge goalkeeper Danny Potter had been injured," Bartlett added.

"Next thing I know I'm in a taxi down there, got there at 11pm on the Friday night, signed the forms Saturday morning and played on the Sunday.

"I enjoyed the day, Cambridge were beaten that day but, personally, as an out-of-contract player, to get that kind of exposure at such late notice was fantastic."

Gateshead face Cambridge in Sunday's final at Wembley with kick off at 16:00 BST.