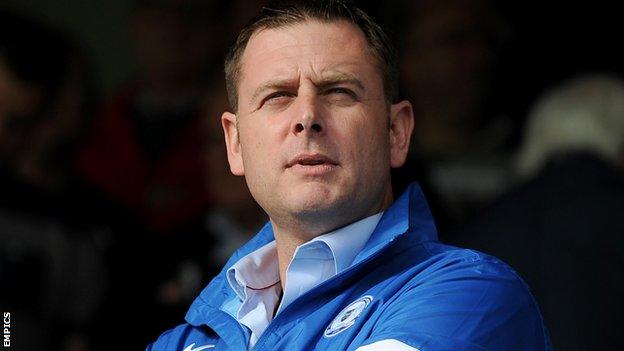 Peterborough United chairman Darragh MacAnthony has said he has played his part in what he deemed a failed season.

MacAnthony's Posh, relegated last year, were beaten in the League One play-off semi final by Leyton Orient on Tuesday.

"Epic failure would describe the season. I know it sounds harsh," he told BBC Radio Cambridgeshire.

"But to be honest in the last 12 months, it's epic failure on my part, the club's part, the players' part and the management and staff's part."

It has been an agonising year for Peterborough and their boss Darren Ferguson, dropping out of the Championship last season in a dramatic final-day defeat by Crystal Palace, who clinched a play-off spot and a subsequent promotion.

And, after winning the Johnstone's Paint Trophy, MacAnthony's mission to secure an immediate promotion back to the second tier was ended in a 3-2 aggregate defeat by Orient.

"It's gut-wrenching, heartbreaking. There's nothing worse than watching another team celebrate on the pitch, like we've done so many times," he said.

"I keep getting told that's football. It's not something I want to get used to, but it's happened twice in 12 months. It's horrible."

Posh have reacted to their play-off exit by releasing five players whose contracts were about to expire and transfer-listing nine entering the final year of their current deals.

MacAnthony bought Peterborough eight years ago, and has been involved in three promotions and two relegations.

But the Irish businessman said he may consider taking a less hands-on approach to running the club.

"I thought long and hard about my own position last night. 'Am I the right thing for the club after the last 12 months?'," he said.

"I'm not withdrawing my financial support for the club - I wouldn't do that.

"I spend so many hours of my day being involved with the club, even to the detriment of people around me. I'm burnt out and need a break from football.

"If I take a break and feel re-energised I may say different at the end of June."