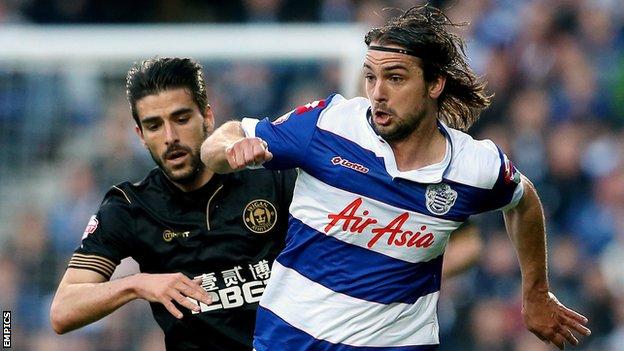 The R's face Derby County at Wembley Stadium on Saturday, 24 May.

He told BBC London 94.9: "I think we have the character, the experience and the quality to win the game.

"There is no favourite. The team that wants it more on the day and the team which shows more guile is going to go to the Premier League."

We respect Derby very much and especially their manager, who worked with us at the beginning of the season. He knows how to set his teams up

Derby finished third in the table and overcame Brighton & Hove Albion 6-2 on aggregate to progress to the final while QPR, who came fourth, beat Wigan 2-1 after extra-time on Monday to seal their place at the national stadium.

Rams boss Steve McClaren was on the coaching staff at Loftus Road for three months earlier in the season and Kranjcar, who has been named in Croatia's provisional 30-man squad for the World Cup, is anticipating a tight game.

"Outside of the two sides who got promoted, us two have played the best football and deservedly came into the final of the play-offs," the 29-year-old said.

"It will be a tough match. We respect Derby very much and especially their manager, who worked with us at the beginning of the season. He knows how to set his teams up.

"It is going to be a big day and it is a one-off game. You play football and live for massive and important games.

QPR had to come from behind to beat the Latics in the second leg of their semi-final on Monday and Kranjcar, who is with the R's on a season-long loan from Ukrainian side Dynamo Kiev, believes they were worthy winners of the tie.

"We have the talent and the ability and we showed character and desire, which is the most important thing in football. That is what won us the game," he said.

"I'm happy and delighted with the way the whole team performed.

"The subs who came on were tremendous. Bobby Zamora played a massive part in us winning and it shows you we have a real togetherness in the team."