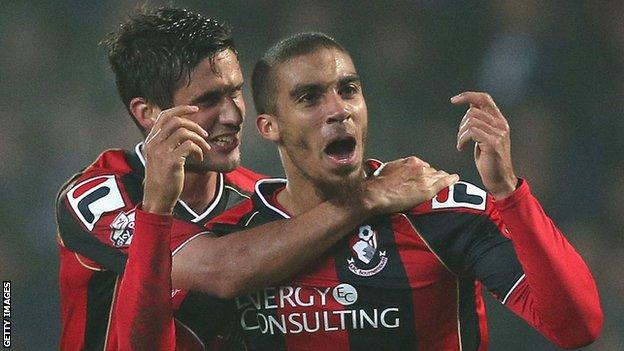 Cardiff City have had a bid in excess of £3m accepted for Bournemouth striker Lewis Grabban.

The 26-year-old scored 22 goals for the Cherries during their 2013-14 Championship campaign and helped his side finish 10th in the division.

Crystal Palace, Middlesbrough and Brighton are also believed to be interested in signing him.

Cardiff were relegated back to the Championship after just one season in the Premier League.

If the player completes the move to Cardiff, the fee will be a record for a Bournemouth player - beating the £1m received for Danny Ings when he moved to Burnley in 2011.

The Welsh club's bid is officially undisclosed, but it is big enough to trigger a £3m release clause in the player's contract.

Cardiff's bid also underline the difference in the finances of the two clubs, who will face each other in the Championship next season.

Official figures released by the Premier League showed Cardiff earned £62m in television money from their season in the top flight.

City will also receive a further £40m-plus in parachute payments following their relegation.

The move for Grabban will increase speculation that striker Fraizer Campbell could be on the move after the Welsh club finished bottom of the Premier League.

Defender Steven Caulker and midfielder Gary Medel have release clauses which can be triggered by relegation.

The Bluebirds have already secured the signature of Javi Guerra from Spanish club Real Valladolid.