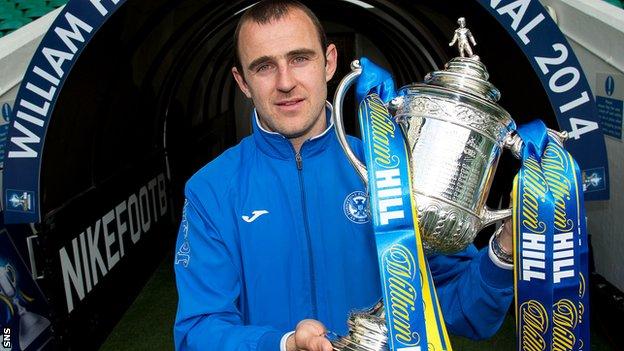 The match at Celtic Park will be Saints' first appearance in the Scottish game's showpiece.

And while they could take 15,000 fans to Glasgow, Mackay believes expectation levels at United are far higher.

"Dundee United's fans will be expecting them to win so I think they'll have more pressure on them," he said.

"It is the first time in 130 years that St Johnstone have got to the final so it is a huge occasion for the club and the players.

"I remember the first day the tickets came out and there was a queue quite a long way back, which you don't normally see at St Johnstone," the 34-year-old defender added.

"So it was great to see that the fans have responded in a positive manner and hopefully we can reward them with a trophy.

"I don't think there is added pressure. Most of the fans you meet say that they are delighted just to get to the cup final.

"We will go into it looking to play our normal game and hopefully that is good enough.

"I honestly think it is a 50-50 game. I'm sure the bookies will have Dundee United as slight favourites, they finished above us in the league so possibly they deserve to be favourites, but we enjoy being the underdogs. We are happy with that."

Mackay played in the 2003 Scottish Cup final, for Dundee, when they lost 1-0 to Rangers.

"I don't think there was too much in the game," he added. "We hit the post in the first minute through Barry Smith and if that goes in then, who knows, it could have been our cup final.

"That's how small the margins are so hopefully it works on our side this time.

"That final was a long, long time ago and who knows for the boys, it could be their last one. They don't come around too often.

"Hopefully it's not their last one but you've got to treat it as though it is, and just go out and give everything you've got."

Meanwhile, Saints goalkeeper Zander Clark, who has been on loan at Queen of the South, has signed a two-year deal with the club.